The Looming Debt and Pension Crisis: An Introduction

As I write this, I'm tempted to do a "Winds of War (Part Five)" blog in continuation of the series begun ia little over a month ago (Part Four of Winds of War available HERE). The reason is that in the past week, there have been so many data points affirming everything we have been saying. To make things efficient, I'm just going to provide a brief recap by providing the headline and a link to the article followed by one of the links to when we initially shared the information with you. After that recap, I'll start a new but related topic of extreme importance. The recap will share what our adversaries and enemies are doing while the new topic will highlight what may be our greatest vulnerability and what we can and should do about it.

WINDS of WAR RECAP (from just the past week)

Regarding the Winds of War, here are just a few of the most significant headlines (with links to articles) from the past week that validate our concerns:

We could go on but I think you get the point. We are seeing rapid-fire reporting of things we have told you about for years. And that is just reports from the last week. Of course, they come out in puzzle pieces while we endeavor to put the pieces together and show you the whole picture. The bottom line of all of this is that the Winds of War ARE Blowing Hard.

Facing The Big Vulnerability That No One Wants to Discuss

Before we delve deeply into a truly dire threat, let's make it clear that there are solutions IF we are willing to face the problem. It is NOT too late if we take courage. But we cannot continue to ignore our vulnerability hoping it will go away. If you want some hope, make certain you see Darkest Hour and the performance of Academy Award winning Best Actor Gary Oldman as Winston Churchill. This will remind you that there is always hope IF we have the courage to do the hard things.

Of course, there are many who want to appease away the threat, hoping that if we allow the Chinese to continue to steal us blind via intellectual property theft on the hope that they might be benevolent enough to continue buying our debt allowing us to avoid the hard issue of addressing it. For those, I recommend a viewing of Oldman's Oscar-winning effort in this clip.

So, do not despair. Just realize the importance of facing the brutal truth in ultimately solving the problem.

Here's the deal. We owe more money than any nation in history ever has. We are on an unsustainable fiscal path. Rising interest rates threaten to swamp our revenue potential. Our politicians have been unwilling to address the problem. The Federal government is joined by state and local governments in being overwhelmed by a debt bomb. Our adversaries and enemies have been looking for ways to exploit this debt to our demise. The pensions and savings we think we have are at risk. Corporate and personal debt are also at unsustainable levels. Student debt is at all-time records. And all of this has happened with a decent economy. Just imagine what happens in the next recession. The derivatives we have allowed the financial system to create are a force-multiplying monster that can swallow whole our entire economy if things go really bad. The dollar will be attacked with the intention of making it as worthless as the Venezuelan Bolivar.

That's probably a good enough start with all the depressing reality. In coming blogs we will take more bite-sized chunks of understanding. But do not fear. There is genuine hope if we take steps now. We just can't continue to ignore the threat.

So, just to get the discussion started, let's begin with the non-partisan Congressional Budget Office (CBO) long-term outlook on government spending and revenues. This doesn't take into account corporate or personal debt. It also ignore municipalities and state governments. And, it doesn't account for unfunded Federal promises. But it is a starting point that is really not debatable.

Here are some excerpts from a report that came out last year about this time:

At 77 percent of gross domestic product (GDP), federal debt held by the public is now at its highest level since shortly after World War II. If current laws generally remained unchanged, the Congressional Budget Office projects, growing budget deficits would boost that debt sharply over the next 30 years; it would reach 150 percent of GDP in 2047. The prospect of such large and growing debt poses substantial risks for the nation and presents policymakers with significant challenges. 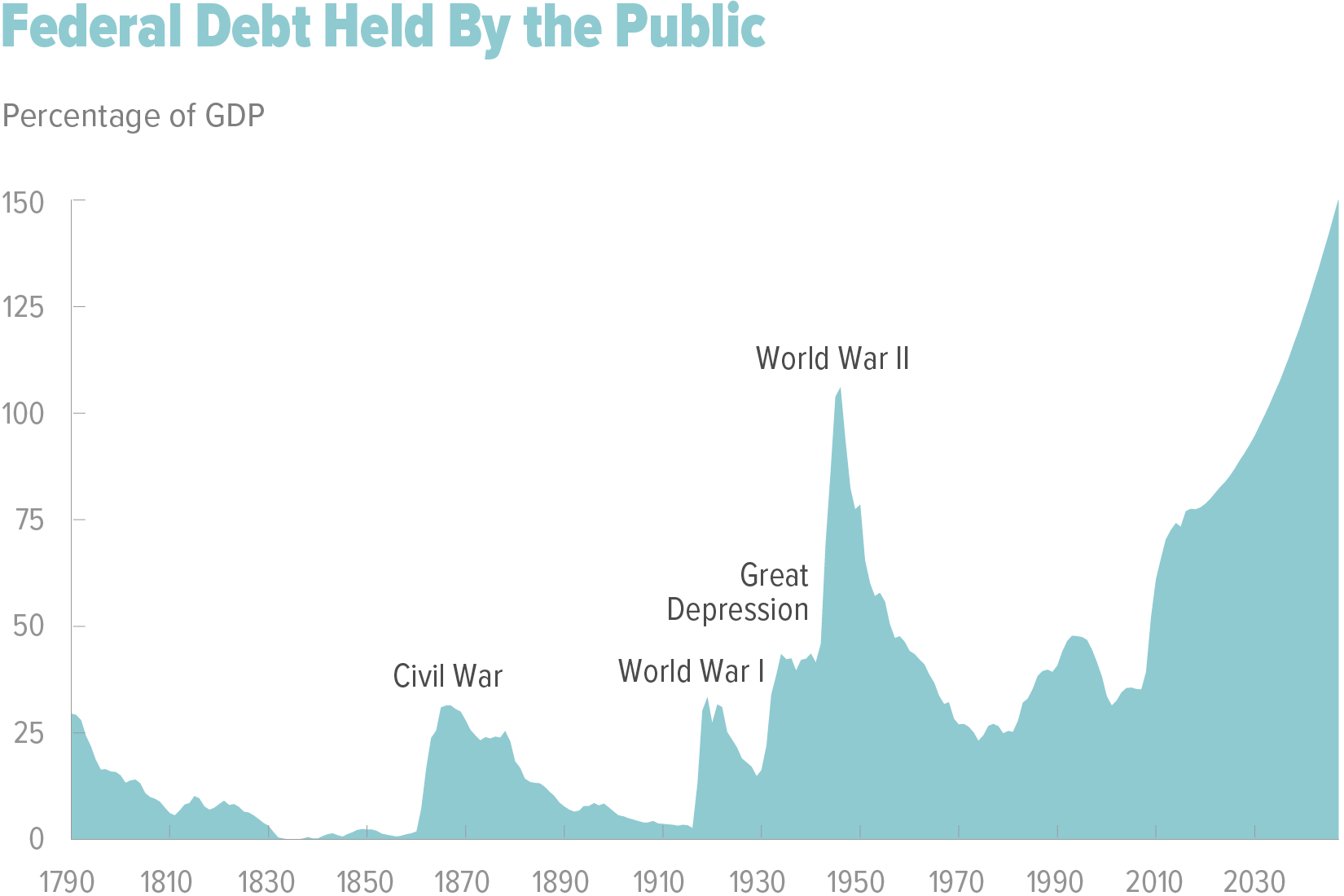 Seeing this is akin to watching a counter slowly click down while attached to a nuclear bomb. Many people might see a digital clock hooked up to a nice briefcase. But for those in the know, it is a very frightening sight. Without a serious change in course, our nation will exceed the amount of debt we had at the peak of the Second World War despite the assumption of continuing economic growth and global peace. In other words, even if you are very sanguine in your outlook regarding peace and growth, there is plenty of reason to worry. Major economies have collapsed and nations ended with a smaller debt burden (relative to their economy) than the CBO projects for us over the next 20 years.

When you combine this sad reality with the fact that our adversaries are preparing for a financial war against us, you can see why we are concerned. The Russians, for example, believe that our debt could end America as we know it.

Rather than go any further, I think we should let this reality set in first. So take some time to read the 2017 CBO report and realize that it was BEFORE the recent tax cuts. There will be a new report soon and we will have comments on it. But for now just realize the main point. The path is unsustainable.