In our last post, we provided a brief introduction to a most serious topic. Before we dove into the debt and pension crisis, however, we offered another installment on our "Winds of War" theme. We thought that would be our last mention, at least for a while, of the mounting evidence that we are headed to an intensifying global conflict. Events and information keep surfacing that compel us to report at least one more time.

Winds of War Continue with Spies, Saboteurs, and Subversion

In the last week we have witnessed some very remarkable things that cannot be ignored. Most of the drama has revolved around Russia and China. As you know, we have been warning for several years that Russia and China were planning to overthrow Western hegemony and the global leadership of the United States. There should be no doubt that Putin and Xi have undertaken significant programs to extricate their nations from Western systems. The question is, "Why?" The answer is rather disturbing. Over the past year the evidence has really piled up. Events of the past week can only confirm the worst of our suspicions. Russia and China are preparing for conflict, and the conflict looks increasingly serious.

Two key things to note from the past two weeks:

1. President Putin is flaunting his power.

We have seen two of the most dramatic examples of power flaunting in modern history over just the past few days. And both happened AFTER it was declared that Russia had gone rogue, after the declaration that the Russian bear was out of hibernation according to the Director of National Intelligence. And, this is the same Putin who said he'd reverse the collapse of the Soviet Union if he could. When Putin spoke two weeks ago, he said, "We warned you. You wouldn't listen. Listen to us now."

Then, Putin announced a leapfrog advance in weaponry:  Nuke-powered and armed underwater drones many times faster than any ship, a nuke-tipped cruise missile 20-times faster than the speed of sound, a plane-launched nuke missile 10-times the speed of sound, and missiles with unlimited range. The announcements were an open demonstration of power. Behind the scenes, Putin was unleashing an equally serious demonstration. He clearly ordered the assassination of a former double agent living in London. The kill was undertaken with a super-secret chemical weapon of extreme lethality. He knew that the Brits would know he'd ordered the kill. But he clearly didn't care. He was flaunting an extraordinary capability without even the slightest pretense or remorse. Using perhaps the most dangerous chemical weapon known to man anywhere could be considered an act of war. Using it in London after declaring Russia virtually invincible is almost unfathomable.

There was one more issue with Russia that, for most people, went well under the radar although it could prove very significant. Russia has been a massive buyer of gold and now controls even more than China. From a Bloomberg report (February 21, 2018):  "The Bank of Russia in January increased its holdings by almost 20 metric tons to 1,857 tons, topping the People's Bank of China's reported 1,843 tons. While Russia has increased its holdings every month since March 2015, China last reported buying gold in October 2016."

This makes today's story from the Siberian Times about tons of gold and diamonds (valued at $368 million) dropping from a small Russian cargo plane over Russia's coldest region all the more intriguing. The cover is that the cargo belonged to a Canadian gold company. But any gold story is suspicious at the moment, especially one that happens in Siberia. Add to that Hungary's recent request to have its gold returned from London and it seems as if (as Sherlock Holmes would say), "the games afoot." This is precisely the activity we should expect as Russia becomes belligerent and other nations take notice.

2. President Xi is consolidating his power.

Late last month we learned that China was banning Winnie the Pooh and the letter "N."  While it sounded like a bizarre attack on Sesame Street ("Winnie the Pooh brought to you by the letter "N"), most observers believe it to have been a move to limit embarrassment for President Xi as he did a massive power grab (Xi has been teased that he looks like the Pooh bear). They also banned the book "Animal Farm," as it points out the flaws of communism. About the same time as the banning, Xi was at work eliminating the presidential term limits, providing shocking proof that China was moving away from freedom rather than toward it (as the West had long hoped). We now have Xi for life, mirroring President Putin's possible sidestepping of Russian term limits to retain power. Both are monkeying with constitutional limits designed to prevent dictators for life.

At the same time, we see Xi taking control of the media, the Internet, and even foreign company activities outside China if they do business in China at any point. The Chinese are even policing Internet content outside their borders and blocking dissent on social media.

This is described as "Xi's Putinization of China" by the American Enterprise Institute:

Xi's ‘putinization' of China is a massive wake-up for America

March 3, 2018—Xi Jinping's recent bid to become president of China and party secretary of the Chinese Communist Party (CCP) for as long as he wishes should come as no surprise. Indeed, this was the next logical move for the Chinese strongman who has spent the last six years purging enemies, accumulating political power and recentralizing economic and national security policymaking. Xi is an ardent admirer of Russian President Vladimir Putin, and is emulating many of  Putin's political and national security strategies….

President Xi has patterned his nation after Unrestricted Warfare, just as we have told you over the past decade. Here is an incredible infographic from Joshua Phillipp at The Epoch Times (click to enlarge) that documents China's long-term war preparations. 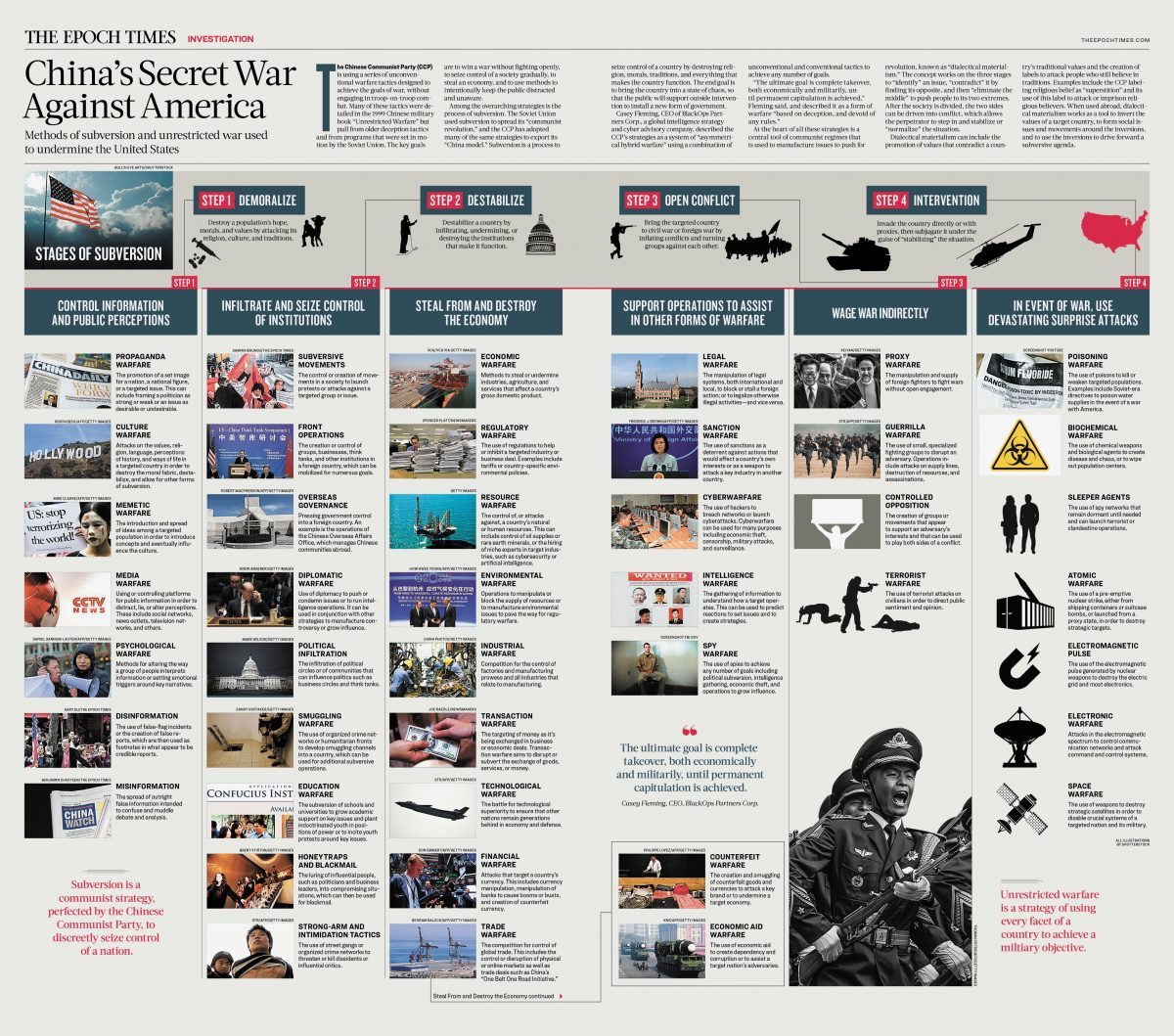 Used with permission from The Epoch Times.

As we've been saying, the winds of war are blowing. And it is essential to remember that both the Russians and the Chinese have threatened to exploit our indebtedness as a weapon.

Looking a Little Deeper into Our Growing Debt Problem

In our last blog post, we promised to take an in-depth look at the debt problem in bite-sized chunks followed by some practical and reasonable solutions (if we have the courage to implement them). We initially looked at the reported Federal Debt, now approaching $21 trillion (not counting future promised spending). The following is a screenshot from USDebtClock.org as this post is written. 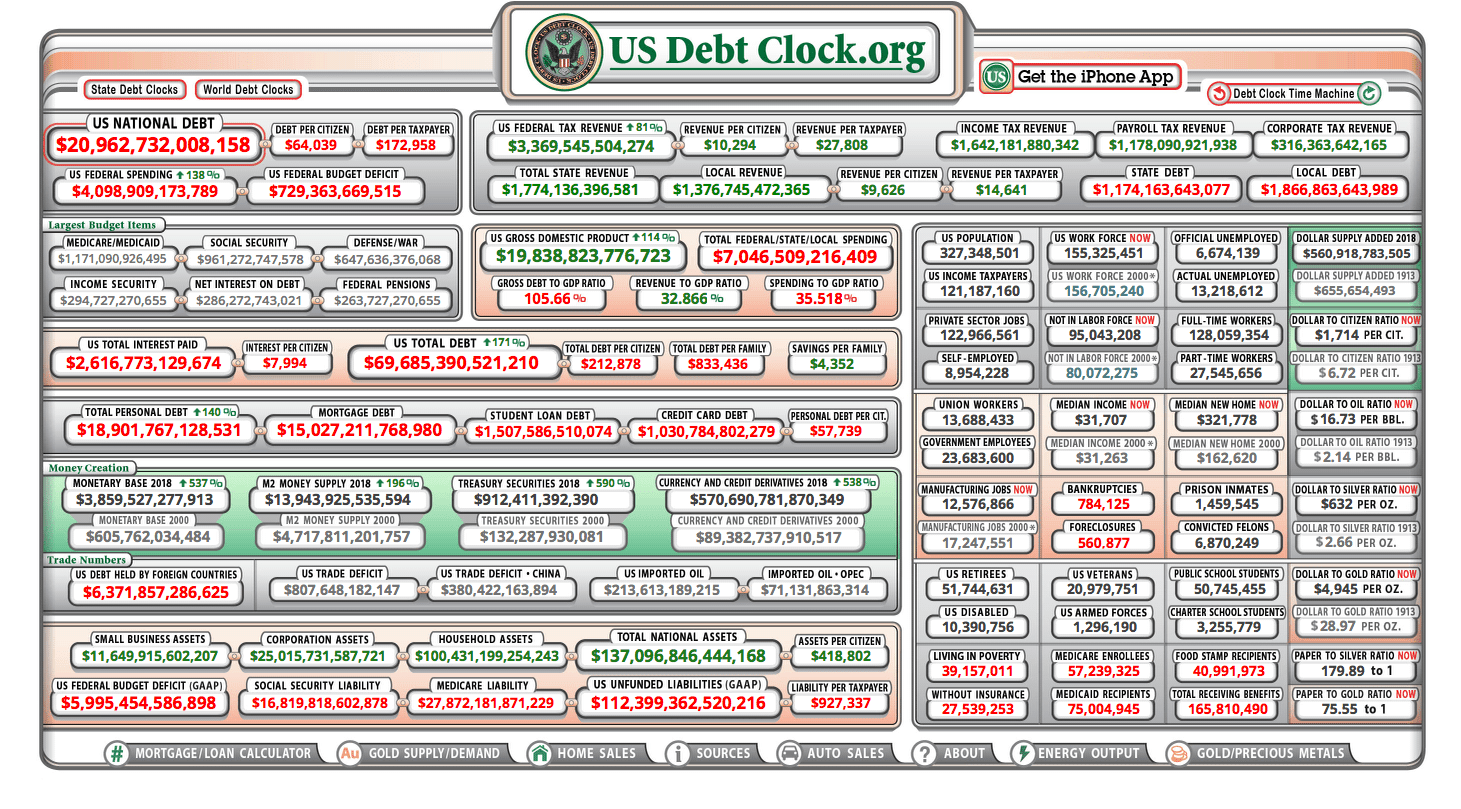 One of the important numbers on this chart is nearly $70 trillion of total debt which equates to over $830,000 in debt per family of four. This is what we mean when we state that we are on an unsustainable path. The estimated annual interest burden for a family at current interest rates is almost $32,000 per year. Now imagine if interest rates were to double from here. Could the average American family annually sustain $64,000 in interest burden? Even if they could, with total debt growing daily, the burden eventually becomes overwhelming. No wonder the Bible categorizes national indebtedness as a curse (Deuteronomy 28: 44).

We are not alone in our concerns. This week, Boston University economist Laurence Kotlikoff warned that "our country, frankly, is bankrupt."  Peter J. Tanous of Lynx Investment Advisory offered similar warnings in a recent commentary:

Rising interest rates will soon have a devastating effect on our economy, mostly because of a single factor that hardly anyone is talking about. The 10-year Treasury yield is about to cross 3 percent, a rate not seen since January 2014. Given our vigorous economy and stock market forecasters pricing in up to four rate increases this year, some credible economists are predicting the 10-year yield at 4 percent by year-end. The single most dramatic effect of today's rising rates is the interest we will pay on our national debt.

During the eight years of the Obama administration, two economic events occurred that befuddled most economists: Our total national debt rose to $20 trillion from $12.3 trillion while interest rates sank to a new all-time low….

Given that our marketable debt doubled from 2009 to 2016, it's remarkable that the annual cost of the interest on the debt rose far less, from $185 billion to $223 billion. Thank you, Federal Reserve.

Some observers suggest that the staggering interest cost on the national debt is the main reason interest rates were kept so low. We now face a potential economic catastrophe as the long period of very low interest rates comes to an end. The recent stock market meltdown has been attributed to rising rates. That is correct, but for the wrong reasons.

True, the long march of rising rates beginning now will be a dramatic change from the long trend of declining interest rates that started nearly 40 years ago. The new upward trend is likely the beginning of a return to historic rates. What are the historic rates, you may ask? We calculate that the average rate paid on the federal debt over the last 30 years was close to 5 percent. And if we get back to that 30-year interest rate average, watch out…

According to the CBO, individual income taxes produced $1.6 trillion in revenue in fiscal 2017.

No wonder so many experts view our national debt as our greatest national security threat.

To recap: We know a few things for certain. First, the Federal Reserve promises to increase interest rates. Second, with higher debt and higher interest rates, at some point the economy is put at grave risk. Third, our enemies and our adversaries are aware of our debt risks and fully prepared to exploit them. Too much debt would make it impossible for us to fund a proper military.

While it is very, very bad, it is not impossible. In future posts, we will break down the debt from a few different angles, and as promised offer some possible solutions. This is something we must not ignore. Our future depends on it.