There are many reasons to marvel at the remarkable ascendance of Bitcoin. The technology behind it is amazing. The idea that a crypto currency even exists is pretty impressive. Yes, there are lots of issues associated. But one thing is for certain. The price of Bitcoin has skyrocketed this year. From pennies per coin to over $16,000 in a few years as shown in the chart from CoinDesk. 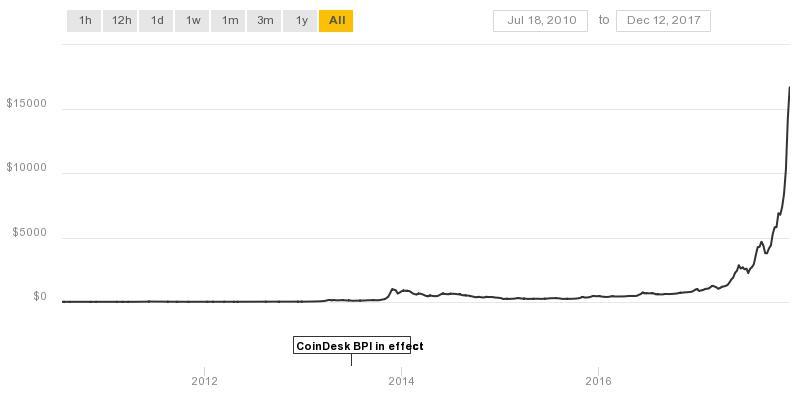 Rather than concentrate on what Bitcoin is and how it works (a primer on the technology can be found here), or whether it is too expensive or just getting started, this Blog will address one very scary thought. Bitcoin has become a darling not simply because of its remarkable attributes. It has also emerged because people around the world are less than satisfied with the existing monetary system. And the dramatic rise in Bitcoin has shown some deep cracks in the architecture of the way we view money. This point was made powerfully by James Kunstler and highlighted by ZeroHedge on December 8:

Whatever else Bitcoin is — and I would suggest a "Ponzie," a "mania," a "con" — this thing is a message.

The message is that financial circulatory system of the global economy is in some kind of distress. Another take-away is that the rush into Bitcoin represents a loss of faith in matrix of rackets that world banking has become, and a flight to perceived safety in a putative financial instrument beyond the clutches and the lying propaganda of nervous, self-interested governments.

For the moment, Bitcoin is doing the job that gold used to do: indexing the loss of value in paper currencies and the things that affect to represent them. Except that Bitcoin has no material reality. It is a figment of mathematics. The vaunted blockchain "technology" is just a formula for packaging information and assigning it to live in various places. It appears to have some worth as a ledger system, for keeping track of accumulated value in an allegedly transparent and honest mode. But the thing it is toting up and sending chits around the world for — Bitcoin — has no value in and of itself.

If "money" can be said to represent a future claim on work, or energy, or things that they produce, then Bitcoin is not money at all because it only represents energy burned in the computer exertions necessary to "mine" the Bitcoins. In other words, it costs a lot of energy to create Bitcoins, and there's no claim on future energy, or work — it's already gone. That energy use is catching the world's attention and is beginning to look pretty profligate. Like, if Bitcoin happened to shoot up over $100,000-per-unit, it would hog an unseemly portion of the worlds electric power.

Anyway, that's only one interpretation of the Bitcoin rush. In the end, I believe it's simply telling us that the global financial system is headed for some serious trouble.

There are many who would violently disagree with Kunstler's initial characterization of Bitcoin. Few, however, can disagree with the second. Bitcoin is a message and it is a loud and clear one. People are dissatisfied with the global monetary system.

We know that Russia and China are dissatisfied. In Russia's case, they appear ready to embrace Bitcoin or equivalent, especially if it rids the world of the American dollar and American economic hegemony.

Here are two articles from today:

RT: Russia May Turn to Cryptocurrencies in Oil Trade

December 11, 2017–Russia reportedly may be among some oil producing nations to ditch the U.S. dollar in crude trade in favor of cryptocurrencies.

Russia, Iran and Venezuela are major oil producing nations dependent on the dollar since the global crude market is traditionally dominated by contracts denominated in U.S. currency.

However, as RT.com explains, all three also face U.S. sanctions; penalties which are proving effective since the sanctioned countries are dependent on the U.S. dollar to sell their crude.

"A decentralized currency – allowing anonymous transactions along with blockchain technology support to facilitate oil contracts – may be the ideal tool to allow the oil producing trio to turn their back on the greenback," RT.com reported.
To be sure, one analyst told CNBC bitcoin mania could prove to be the flashpoint for some of the world's largest oil producing countries to make a major move against the dollar.

"The advent of cryptocurrencies, therefore, represents a fresh catalyst for commodity-producing countries wishing to abandon the dollar as a means of payment for oil," said Stephen Brennock, oil analyst at PVM Oil Associates, in a research note seen by CNBC.

December 11, 2017–Russia's deputy finance minister Alexei Moiseev has reportedly stressed that buying bitcoin and other cryptocurrencies will be legal in the country.
The Russian government will not outlaw nor punish buying or selling cryptocurrencies, Moiseev revealed according to RT.

Our government has been taking a very different position. For one thing, the idea of buying or selling large amounts of Bitcoin without a specific license is viewed as illegal. The Federal Reserve Vice Chairman has publicly stated that "Bitcoin is a serious risk to financial stability." Deutsche Bank is predicting a boom then crash in Bitcoin that could send shockwaves into the real economy:

Could the market's new darling become its next black swan event ?

The bitcoin craze could pose a real risk to the broader market next year, Deutsche Bank warned last week, ahead of the cryptocurrency's launch on futures exchanges, scheduled to take place Sunday.

Torsten Slok, the firm's chief international economist, sent to clients a list of significant risks to the market in 2018. Included on that list: A crash in the price of bitcoin, higher inflation and the threat of North Korea.

What is important about all of this is that those in favor of and those opposed to Bitcoin really represent a tug-of-war regarding the global system. And, it's not the only stress on the Western-based financial system that has been in place for decades. The Chinese have developed a fully integrated system that now has commercial applications catching on globally. In addition, the cancer of negative interest rates continues to erode global confidence.