The War on Cash and Unintended Consequences

Ever since 2008, the elements of economics have been, well, strange. Ever since 2001, the elements of security have been a little strange as well. And the two are connected in so many ways. As we have previously noted, Osama bin Laden viewed 9/11's terrorism as an economic attack. And, the market collapse of 2008 had evidence of financial terrorism. So, in that context, the recent article by Paul Craig Roberts in the Foreign Policy Journal makes some good points but doesn't provide the whole picture:

The Financial System Is a Larger Threat than Terrorism

March 9, 2016
The Federal Reserve's interest rate policy serves the interests of the government and financial institutions at the expense of the public.

In the 21st century Americans have been distracted by the hyper-expensive "war on terror." Trillions of dollars have been added to the taxpayers' burden and many billions of dollars in profits to the military/security complex in order to combat insignificant foreign "threats," such as the Taliban, that remain undefeated after 15 years. All this time the financial system, working hand-in-hand with policymakers, has done more damage to Americans than terrorists could possibly inflict.

The purpose of the Federal Reserve and US Treasury's policy of zero interest rates is to support the prices of the over-leveraged and fraudulent financial instruments that unregulated financial systems always create. If inflation was properly measured, these zero rates would be negative rates, which means not only that retirees have no income from their retirement savings but also that saving is a losing proposition. Instead of earning interest on your savings, you pay interest that shrinks the real value of your saving.

Central banks, neoliberal economists, and the presstitute financial media advocate negative interest rates in order to force people to spend instead of save. The notion is that the economy's poor economic performance is not due to the failure of economic policy but to people hoarding their money. The Federal Reserve and its coterie of economists and presstitutes maintain the fiction of too much savings despite the publication of the Federal Reserve's own report that 52% of Americans cannot raise $400 without selling personal possessions or borrowing the money.

Negative interest rates, which have been introduced in some countries such as Switzerland and threatened in other countries, have caused people to avoid the tax on bank deposits by withdrawing their savings from banks in large denomination bills. In Switzerland, for example, demand for the 1,000 franc bill (about $1,000) has increased sharply. These large denomination bills now account for 60% of the Swiss currency in circulation.

The response of depositors to negative interest rates has resulted in neoliberal economists, such as Larry Summers, calling for the elimination of large denomination bank notes in order to make it difficult for people to keep their cash balances outside of banks.

Other neoliberal economists, such as Kenneth Rogoff want to eliminate cash altogether and have only electronic money. Electronic money cannot be removed from bank deposits except by spending it. With electronic money as the only money, financial institutions can use negative interest rates in order to steal the savings of their depositors …. [To CONTINUE READING at Foreign Policy Journal…]

Dr. Roberts gets several things right in his article. He grasps the threat of the financial system relative to traditional terrorism and describes the magnitude. What he is missing, however, is the threat TO the financial system by terrorists. The irony is that what he shares as truth regarding our systemic vulnerability is well understood by those who would destroy our nation. Even more concerning is the fact that our enemies have learned how to attack and take down economies as Unrestricted Warfare. An EMP launched by North Korea would collapse our way of life. Causing a stock market crash is a new and highly effective means of terrorism. A cyber attack could wipe out our financial system or critical infrastructure. Lloyd's of London did a city by city assessment of risks (as reported by the University of Cambridge). A stock market crash is estimated as 10 times worse in magnitude than traditional terrorism. 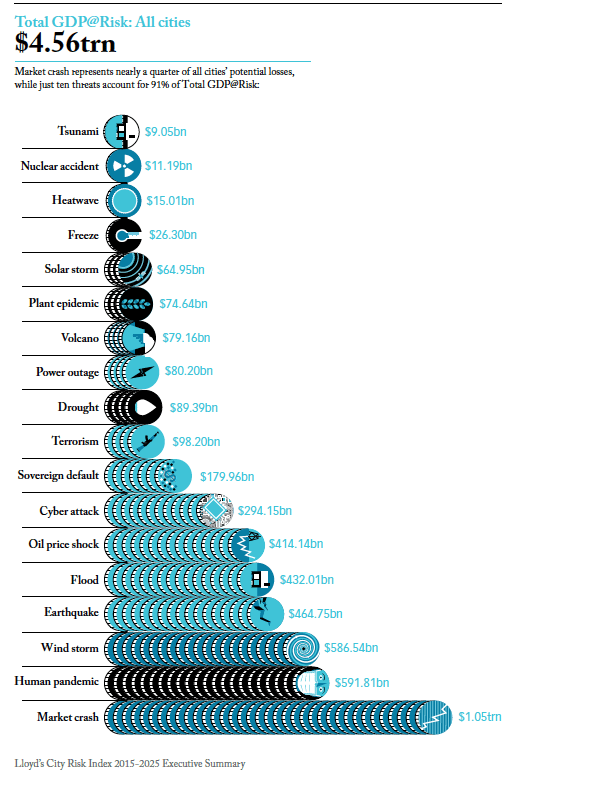 It is interesting to note that many of the highest risk/impact categories listed are subject to terrorism including market crash, pandemic, oil price shock, cyber attack, power outage, and nuclear accident. It also should be noted that the risk of power outage from EMP or other cyber attack is not directly addressed in this report although Lloyds has also studied it and considers it a grave threat. Dr. Roberts makes the direct comparison between traditional terrorism and a market crash but misses all the other non-traditional terror risks.

Dr. Roberts does catch on to the fact that the Federal Reserve's Zero-Interest-Rate Policy (ZIRP) is destructive. Keep in mind that this policy began in response to the 2008 market collapse that was, at least in part, caused by financial terrorism. In order to stimulate our economy, the Federal Reserve dropped interest rates to zero and kept them there. Other nations have gone further, even dropping interest rates BELOW zero, also known as negative interest rates. What this means is that someone loaning money has to pay interest to the borrower. Really! The frightening thing is that something like $7 trillion worldwide has been loaned at negative interest rates. That is very corrosive over time and yet it is official policy in many different nations. And it is something that Janet Yellen says our own Federal Reserve should consider.

The reason that Central Banks have chosen to impose negative interest rates is that they don't want people saving cash. Instead, they want people investing or spending money to keep our feeble economy propped up. The problem is that when interest rates turn negative, people take their money out of the bank and stuff it in the mattress. This has been happening all over the world. And it is showing up in sales of safes in Japan and hoarding of cash elsewhere. In response, governments around the world are looking for alternatives to paper money. Many claim that by banning paper money, we would de-fund terrorists and criminals. In some cases, the argument is made simply to ban bills of larger denominations, as suggested by former Treasury Secretary Lawrence Summers. In Greece, they flirted with an all electronic payment system. The goal, according to a presentation in Davos recently, is to eliminate the use of paper money in a decade or less.

The funny thing is that the push to ban large-denomination bills has coincided more with negative interest rates than terrorism or criminal activity. The fact is that North Korea has been counterfeiting $100 bills for quite some time and flooding the world with them. Drug dealers and terrorists have used cash for decades. It seems more reasonable to believe that Central Banks want to reign in paper money now because its existence makes their policy control more difficult with negative interest rates.

The problem is that actions have all sorts of unintended consequences. Terrorism leads to an economic slowdown. An economic slowdown leads to negative interest rates. Negative interest rates are supposed to spur economic activity but they result in cash leaving the system. Cash leaving the system may lead to an end to paper money and an all-electronic system, in part designed to stop terrorists. But, an all-electronic system could lead to tremendous vulnerability in the case of cyber attack, financial terrorism, or an EMP. A vicious circle for certain.