The War on Free Speech and How to Fight Back

The First Amendment to the Constitution guarantees free speech for all Americans. Unfortunately, there are many efforts in the courts and culture to remove that right and restrict the people's right to speak, express, or even think. Hate speech, blasphemy laws, and political correctness are all being used to silence anything that goes against the narrative of the day.

We've covered this topic before. In fact, here are two posts we wrote in September:

Silencing Your Opponents as a Means of Economic Warfare (Part Two)

We bring the topic up again now because there have been some significant additional developments worth highlighting.

First, the area of the country that used to stand steadfast behind even reprehensible speech, Left Coast liberals, have now abandoned free speech all together:

That's pretty scary. What's worse is the awareness that many anti-speech efforts are funded by those with less than honorable intent. For example, we have shown that the Russians have funded civil unrest Facebook posts with the effects of denying free speech. The Chinese have funded Universities, demanding that no anti-China speech be allowed on campus. And, most recently we learned that China has been funding politicians in Australia, to control the narrative there. This is a huge scandal. The Chinese government is attempting to silence any criticism.

A SECRETIVE lobbying agency dedicated to strengthening China's Communist Party's influence by recruiting "friends" in the West is increasingly becoming a source of suspicion in Australia, according to an expert.

China's United Front Work Department, which is under the control of the Communist Party's Central Committee, officially focuses on building support for the party in China and abroad. The ultimate goal of the Leninist-style operation — recently referred to as a "magic weapon" by president Xi Jinping — is to influence the West and isolate enemies.

It's also tasked with coercing elites outside the party to ensure of their political loyalty.

Following Labor Senator Sam Dastyari's forced resignation from senior parliamentary positions over links with China and accusations the popular politician was "under a foreign influence", Sydney's Lowy Institute East Asia program director Merriden Varrall warned there was reason to believe the department was ramping up secret operations in Australia.

Dr Varrall said the department had been given a budget boost in recent years to increase its power and coerce Chinese citizens at home and abroad "to their perceptions".

"The primary focus is on Chinese citizens around the world who may not be absolutely supportive of the Chinese party's position.

"They want to use that to more broadly influence the agenda in other countries like Australia to expand their influence."

[To read the full article: http://www.news.com.au/world/asia/chinas-secretive-lobbying-agency-stepping-up-its-operations-in-australia/news-story/7a21096c7de8d2d74f3e110c3dc858e6]

Another attempted blow to free speech is the coverup of the IRS criminal denial of tax-exempt status to conservative groups under the Obama Administration. From TheBlaze (November 20):

Lois Lerner, a former top official at the IRS, and her former deputy have asked a federal court to keep their testimonies in the Tea Party targeting scandal private forever, citing risk of physical harm to them or their families if the testimony is made public.

What happened? Lerner and her deputy, Holly Paz, filed a motion in federal court last Thursday asking the testimony — which includes documents and tape-recorded depositions — to be sealed forever, according to the Washington Times.

Lerner and Paz were the central figures in a 2013 scandal and investigation during the Obama administration after it was revealed the IRS' Exempt Organizations unit — which Lerner led — was denying or delaying Tea Party organizations tax-exempt status because of political ideology.

The groups later filed a class-action lawsuit demanding answers and compensation for being unfairly targeted. The lawsuit remained in litigation during Obama's administration, but was recently settled by the Trump administration. The targeted groups received settlements and an apology from the IRS.

We should not allow government officials to cover up when caught denying Americans their right to speech!

On the good news front, we do have recognition of the dangers we face. As a good example, we have highlighted the free speech threat of the discredited Southern Poverty Law Center (SPLC) who massively overreached in labeling hate organizations to advance a leftist political agenda. The Center for Security Policy, targeted undeservedly, struck back with a Facebook Live presentation. 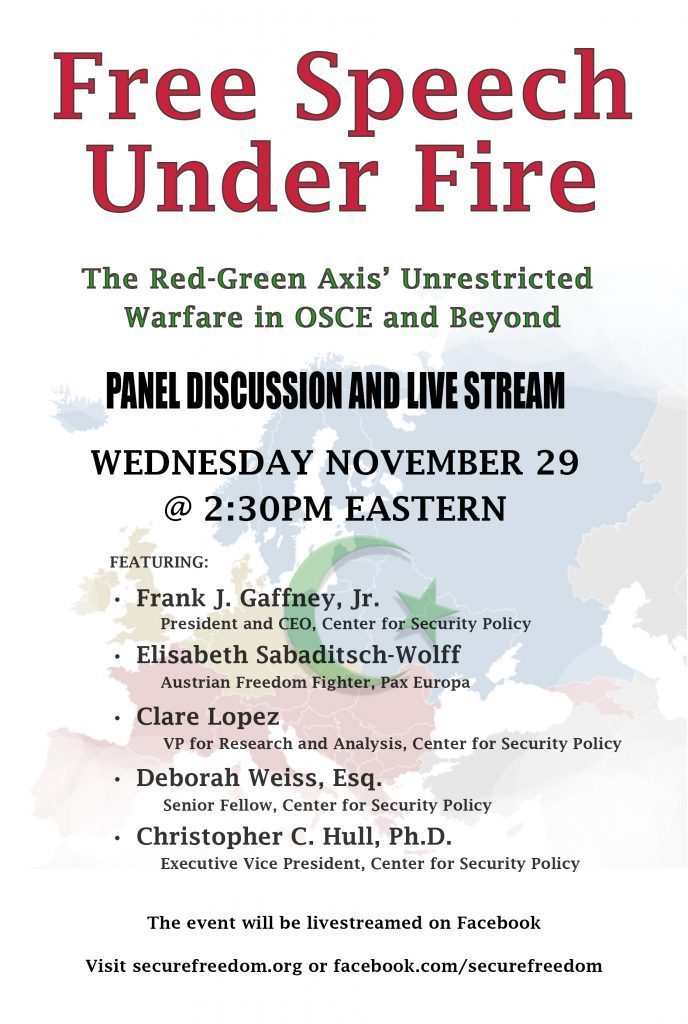 The full presentation can be viewed at this link:  "Free Speech Under Fire."

The PDF of an Occasional Paper produced by the Center can be downloaded HERE.

Here is a summary from Frank Gaffney:

It seems that every day, from every direction, the enemies of freedom encroach more upon what our Founders rightly described as a God-given and inalienable right.

We see "snowflakes" on college campuses shouting down or even attacking speakers with whom they disagree.

We see the politically correct mainstream media exploding in outrage over every utterance of President Donald J. Trump that does not conform to their standards.

We see politicians too mealy-mouthed to tell the truth – especially when it comes to the brutal, totalitarian Islamic ideology known as Sharia – lest they be subjected to charges of the wholly made up and phony syndrome dubbed "Islamophobia."

We see social media giants stamping out the speech of those with whom they disagree, while they allow the speech of jihadis to flourish.

We see international organizations, from the United Nations to the Organization of Islamic Cooperation to the little-known Organization for Security and Cooperation in Europe (OSCE), each working in its own, insidious way to strangle expression.

And from all these quarters, we hear warnings about the ostensibly burgeoning danger of "hate speech."

But what is hate speech, exactly?

More and more, it appears it is simply shorthand for depicting – and curbing – whatever expression the radical Left and Sharia-supremacists may find objectionable. Anything with which they disagree is dubbed "hate" and must be terminated.

In short, this "Red-Green Axis" – i.e., the collusion between neo-Marxist and Islamist forces against America and the West – works systematically to punish speech to which such partisans take offense, a category that seemingly expands with each passing day.

This Occasional Paper is the latest in a series of products addressing such subjects to be published by the Center for Security Policy Press, including:

Free Speech Under Fire provides a further examination of the unrestricted warfare now being mounted in forums like the Organization for Security and Cooperation in Europe that is inexorably garrotting free peoples' ability to speak. It includes:

Taken together, these essays validate the proposition that the Red-Green Axis' dark machinations amount to "unrestricted warfare" against free expression. That term was featured by two colonels in the People's Liberation Army in their 1999 book, Unrestricted Warfare: China's Master Plan to Destroy America. Translated from original PLA documents, this volume describes how "American military doctrine is typically led by technology; a new class of weapon or vehicle is developed, which allows or encourages an adjustment in strategy."[4]

The authors, Chinese military strategists Qiao Liang and Wang Xiangsui "argue that this dynamic is a crucial weakness in the American military, and that this blind spot with regard to alternative forms of warfare could be effectively exploited by enemies" – a point not lost on the West's alt-Left and its Islamic infiltrators as well.

Unrestricted Warfare teaches that the front lines can be almost anywhere.

It has become increasingly obvious that the front lines of the unrestricted war on free speech are on university campuses, where enemy-planted radical thought and rhetorical excess thrive.

The front lines are in newsrooms, long populated by not only totalitarians' useful idiots, but active agents as well.

The front lines are on Facebook, Google, YouTube and Twitter as they crack down on conservative and counter-jihad speech, while allowing not only Russian influence operations, but jihadist propaganda and incitement, as well.

And the front lines are certainly at multilateral forums like the OSCE, where Sharia-supremacists work hand-in-hand with globalists to advance their common aim of centralizing and exercising control over both the means and the content of communications.

American policymakers and citizens alike must stand firm in the face of the relentless assault currently being mounted on the foundational freedom of speech that is described in the pages that follow.

It's time to challenge the Left's selective indignation about "hate speech" that gives a pass to Black Lives Matter, Antifa and many jihadists' incitement of violence.

It's time to take on the Sharia-supremacists who condemn as "Islamophobia" what, in reality, is simply truthful renderings of their anti-freedom political, military and legal system really means knowing too much about Sharia, and saying it aloud.

And it's past time we reined in international organizations including by refusing to submit to their boa-like constriction of free speech.

We at the Center for Security Policy hope that you will stand with us – and stand up for free speech.

It's an honor for me to work with the Center on protecting America's liberty.

We also have good news from the Trump Administration in regard to Free Speech. Attorney General Jeff Sessions has gone public with his commitment to preserving the First Amendment: