As we acknowledge the 100 year anniversary of the founding of The Federal Reserve, it may be instructive to review their actions of a little over five years ago leading up to the Great Crash of 2008-09. In fact, it was the summer of 2007 when Jim Cramer went on his famous "They Know Nothing" rant.

Just now, the Federal Reserve has released its minutes and it is obvious that Cramer was right. Here are excerpts from a CNBC article that makes that very point:

Jim Cramer Was Right—They Knew Nothing!

The summer of 2007 was a time of intense stress in the financial markets.

Credit-rating agencies had begun to mark down large amounts of asset-backed securities and collateralized debt obligations linked to subprime mortgages. Quant funds spent about a week in meltdown mode. The subprime market was being roped off as a toxic wasteland. But the problems that began in subprime had spread to Alt A and parts of the prime mortgage market. Stocks were shaky. Certain companies — Countrywide and Bear Stearns, especially — we being talked about almost in the past-tense. Corporate credit was "infected," with high-yield bond and loan spreads moving way out.

It was in this atmosphere that Jim Cramer gave his famous "they know nothing" speech. The transcripts of the Federal Open Market Committee of the Federal Reserve released Friday show that Cramer was absolutely right. (Please see Note 1 below.)

I have talked to the heads of almost every one of these firms in the last 72 hours and he has NO IDEA what it's like out there. NONE! And Bill Poole, he has NO IDEA what it's like out there. My people have been in this game for 25 years and they're LOSING THEIR JOBS and these firms are gonna GO OUT OF BUSINESS and it's nuts. They're NUTS! They know NOTHING! This is a different kinda market. And the Fed is ASLEEP. Bill Poole is a shame, he's SHAMEFUL! He oughta GO, and READ the Accredited Home document, at least I READ the darn thing.

At the time, this was widely mocked. But the transcripts of the 2007 Federal Open Market Committee released Friday make it clear: Cramer was right. 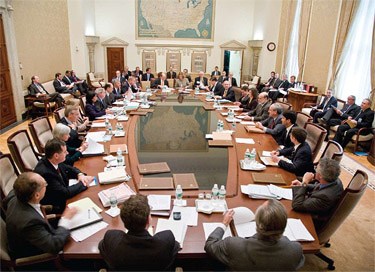 The CNBC article goes on to document just how wrong the Fed was, using the transcripts from their meetings at the time. The almighty Fed was wrong and the Wall Street guy was right.

Central Bankers, including the Fed seem convinced of their course once again while ignoring what should be obvious warning signs. The Fed is leading a global charge among Central Bankers to devalue their currencies. This is made clear in this week's BARRONs and here are a few key quotes:

Up and Down Wall Street

The Other Lance Armstrongs

Everybody's racing to the bottom these days, including central bankers.

The cheap dollar owes much to the Federal Reserve's successive rounds of quantitative easing, the polite term for the central bank's buying of bonds with money created out of thin air. The Fed's current policy—let's call it QE-4ever—consists of buying a combined total of $85 billion Treasury and agency securities per month, which is close enough to a cool $1 trillion a year for government work. And by Lonski's reckoning, the dollar is down by 17% against a broad range of currencies compared with the 2002-07 recovery and off nearly 50% from its record high of 1985.

But competitors are complaining about the Americans' use of monetary steroids to boost export performance. Back in 2010, Brazil complained that the Fed's QE2 threatened a "currency war" of competitive devaluations. And now, like Lance Armstrong, Japan says it needs the monetary injections to compete.

At least in the stock market, the results have been positive. The Nikkei 225 is up nearly 25% since early November, including a 2.9% jump Friday, with the help of the elixir served up by the nearly 12% plunge in the yen over that span, to more than 90 yen to the dollar from less than 80. But, if you're keeping track in greenbacks—which Barron's former foreign editor Peter du Bois would remind readers is what counts—the gain in the dollar-denominated iShares MSCI Japan Index exchange-traded fund (ticker: EWJ) is only about half that of the Nikkei.

Here in the U.S. of A., she explains, money-printing "causes a serious divide between consumers and biz. John Q. gets crumbs in the form of miserable wage growth. Biz gets all the capital it needs/wants. So far, they're gettin' away with this screaming imbalance. But as the gap between the two widens, at a point, will come a day of reckoning.

Meanwhile, Joanie continues, "It is at the same time shocking and disheartening that these goobers have not yet figured out that printing money does little beyond goosing stock and commodities prices." And the liquidity-boosting drugs have managed to get some movement in housing, with starts actually approaching the one-million annual rate—which marked the recessionary nadir of past cycles. But, as Lonski reminds us, recent experience should inspire caution about a housing revival without solid jobs gains.

Notice the key phrase, CURRENCY WAR? That is popping up in the press quite a bit and is descriptive of Phase Three as described in our book, Secret Weapon. That is a form of economic warfare by which major nations competitively devalue their currencies. What they don't realize, at least according to the BARRONs article is that it doesn't work. It would appear to be as misguided and naive as the policies of the Fed leading up to the 2008-09 crash. Put in another context, the reality of Global Economic Warfare, such policies may be tantamount to lowering all defenses in a time of war. We will soon post on how the Chinese and others are beginning to reject dollars and U.S Treasury bonds, opting for investments in stocks, real estate, gold, energy and other property-oriented assets. All of this is part of the coming Phase Three attack outlined in our original pentagon research and Secret Weapon.

CNBC used the term Currency War and made the same point as the BARRONs story in an article and interviews last week:

Published: Monday, 14 Jan 2013 "…Ever since the Fed launched QE2 in August 2010, we have been in the currency-war regime," said Alessio de Longis, portfolio manager of the Oppenheimer Currency Opportunities Fund. "It will continue to be this…"

It is important to note that Jim Rickards wrote a book with the title Currency Wars that shows the reality going much deeper than simply failed monetary policy. He explains many of the things we have been saying in regards to nefarious plans to destroy the U.S. dollar as real act of economic warfare. Some in Russia and China, as well as parties in the Middle East and Latin America are actually planning to use our dollar weakness to launch an all-out assault on our currency's reserve status in an effort to destroy our economy. Rickards' research is being promoted as "Pentagon analyst predicts the next Financial Pearl Harbor." It may sound far-fetched but the evidence is there and is well documented. It separately matches what we found independently. We can be certain that such plots exist, whether or not they ultimately become successful. The saddest part is that our Federal Reserve and Administration seem hell-bent on pursuing those policies that make us most vulnerable, reminiscent of what took place in 2007. The Wall Street Journal also had an opinion piece regarding the Fed and its policies. Here are the opening and closing paragraphs of that powerful piece that should be read in its entirety:

Paul Moreno: Gold, Greenbacks and Inflation: A History and a Warning

The Federal Reserve's 100th birthday is no cause to break out the champagne.

The Federal Reserve, which celebrates its 100th anniversary this year, is tasked by Congress with managing the money supply so as to preserve price stability while maximizing employment. But with the central bank having increased the money supply by 25% since the financial crash of 2008—while the federal government has borrowed $5 trillion—can inflation be far off? ….

. . . Now the inflationary potential of deficit financing has grown enormously over the first Obama term. The lesson of American history is that it is difficult enough for the government to resist popular demands for inflation to relieve private debts. When the government itself is the country's chief debtor, resistance is all but impossible.

Mr. Moreno, a professor of history at Hillsdale College, is the author of "The American State from the Civil War to the New Deal," forthcoming from Cambridge University Press.

It should be noted that these actions were very predictable to many observers, including our enemies. Our initial Pentagon report not only detailed what would happen but also how the response was expected by those planning to attack us. Yet, just as the Fed seemed clueless in 2007, the same seems true today. Interestingly, right in the midst of the 2008 collapse, Jim Cramer directly mentioned the possibility of financial terrorism. Here is the video and some links:

In the first link, there is a video clip in which Cramer makes the case that it was not the traditional short sellers attacking America. He said that the market's action looked a great deal more like Financial Terrorism.  Our research proved him right on this count as well.

Bottom Line:  Cramer was right in 2007 even as the fed was wrong. He was right in 2008 even with his theory  of financial terrorism and the Government seemed clueless, taking the wrong action and making things worse. Now, as we enter Phase Three of the Economic War, it seems we are following the wrong course once again.