Understanding How We are Losing the Global Economic War

In our last post, we explained that the United States is an Empire falling. Part of the reason we are falling is that other nations are active in the global economic war, fully aware of the stakes, and recognizing the tide of history. Future wars may be military but not exclusively. Putin knows this as do the Chinese and even al Qaeda. Most Americans are unaware, however, that anything other than the U.S. dollar has been used as money. They assume that since the U.S. has been the dominant economy and military for their lifetime that it will always be so. Our enemies understand that the two are linked and that it is easier to attack our economy than directly confront our military. When the economy falters, we pull back the reigns on defense. This is a variation of a long-held strategy. It is how we won the Cold War without firing a missile.

Of course, we bear a great deal of responsibility for making our economy vulnerable in the first place. Although we should certainly explore the means used to undermine America (and we do in this Blog), we also must accept the fact that we have made ourselves susceptible with bad policy, social welfare experimentation, and a host of other politically led disasters. If we assume the world will always want America on top, we then have license to be profligate in our spending, take on excessive debt, and demonstrate disdain for any limitations of prudence. It is precisely this reason that we must understand the nature of the world and the global economic war we are facing.

The last post showed the shocking evidence of American stagnation relative to world economic growth. Yet we continue to act as if our economy and limited population continue to represent more than a quarter of global output. How could it? We have failed to adapt to a changing world. A case in point is made in the pages of The Wall Street Journal. Here are excerpts:

A new global index highlights the harm from the U.S. tax code.

The new champion of tax competitiveness is Estonia, where—liberals may be astonished to learn—people enjoy the rule of law and even paved roads, despite reasonable tax rates. (See the list nearby.)

Liberals argue that U.S. tax rates don't need to come down because they are already well below the level when Ronald Reagan came into office. But unlike the U.S., the world hasn't stood still. Reagan's tax-cutting example ignited a worldwide revolution that has seen waves of corporate tax-rate reductions. The U.S. last reduced the top marginal corporate income tax rate in 1986. But the Tax Foundation reports that other countries have reduced "the OECD average corporate tax rate from 47.5 percent in the early 1980s to around 25 percent today."

This is also a message to self-styled conservative "reformers" who lecture that today's economic challenges aren't the same as they were under Reagan but propose to do nothing about the destructive U.S. corporate tax code. They're missing what could be the single biggest tax boost to economic growth and worker incomes. Abundant economic research, by Kevin Hassett and Aparna Mathur among others, has shown that higher corporate taxes lead to lower wages.

Rather than erecting an iron tax curtain that keeps U.S. companies from escaping, the White House and Congress should enact reform that invites more businesses to stay or move to the U.S. 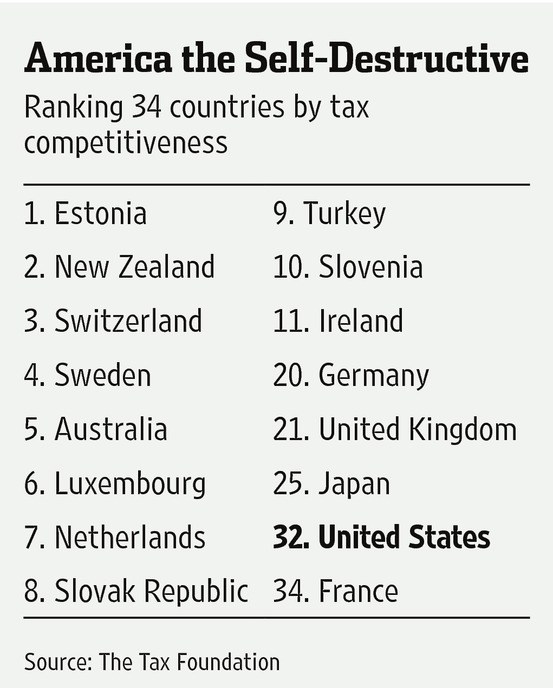 According to The Tax Foundation, our tax competitiveness ranks 32nd in the world, barely above France which recently adopted a 75% tax rate. Of course, even the French have seen this policy as a failure and are looking to cut taxes.

American corporations have responded to this problem by using tax loopholes (inversions) that the President has deemed unpatriotic. He may be right in part, but the solution is to make us tax competitive. If we don't, we will continue to see a drain on our economy as some of our best companies seek residence overseas.

In my book Game Plan, I argued that tax reform was critical to becoming competitive in the global economic war we face. In fact, of the eight steps, three were specific to this point. Here are the eight steps:

We are in a global economic war and we seem to be losing. Time to wake up and get in the fight before it is too late.