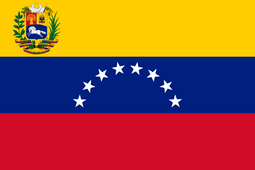 A slow-moving train wreck. The failure of a socialist state. The collapse of a dictatorship. Civil war. The death of a currency. Whatever description you'd like to apply to the tragedy of Venezuela is likely an understatement. Anyone with an understanding of history could see this coming, of course. The disastrous socialist policies of Hugo Chavez were almost a textbook prescription for economic failure. This is despite the fact that Venezuela boasts the world's largest proven oil reserves and was a founding member of OPEC, having almost a quarter of all OPEC oil.

My alma mater, The University of Tulsa, is one of the top petroleum engineering schools in the world. Although my focus was on business and economics, we knew the importance of oil. We also knew that Venezuela was the bright spot for oil in this hemisphere. So it was an honor that the Venezuelan Oil Minister at the time and Chief of OPEC would send his son to Tulsa. Just a few years later, Venezuela purchased half of CITGO (formerly Cities Service) from Southland Company. CITGO was a major employer in Tulsa. I had many friends who worked there and it was a HUGE deal at the time. Southland sold them the other half in 1990. 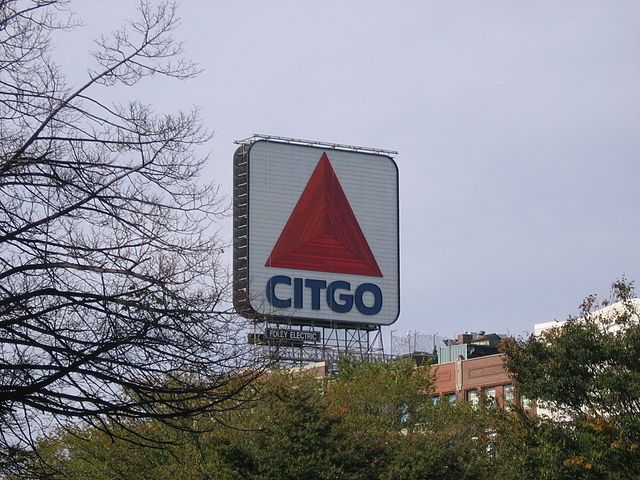 My point? Even though CITGO was owned by the Venezuelans for two decades, it has also been an integral part of the American energy industry. In fact, in Boston they have a saying: "London has Big Ben. Paris has the Eiffel Tower. Boston has the CITGO sign."

Watching Venezuela crater brings mixed emotions. We knew it was inevitable as Hugo Chavez and his successor Nicolas Maduro followed ruinous socialist policies, concentrated dictatorial powers, and cozied up to our adversaries and enemies. But that makes this no less tragic for all involved. And, the implications for the United States going forward appear increasingly ominous. We will discuss the economic implications of the collapse in this Blog as well as some of the extremely serious national security concerns. But this will by no means be the last word we need to provide. Count this as "Part One" with much more to come.

What a Phase Three Hyper-Inflationary Currency Collapse Looks Like

Recently, Venezuelans had to trade 1,000 times as many Bolivares to get a single U.S. dollar as they did just seven years ago. 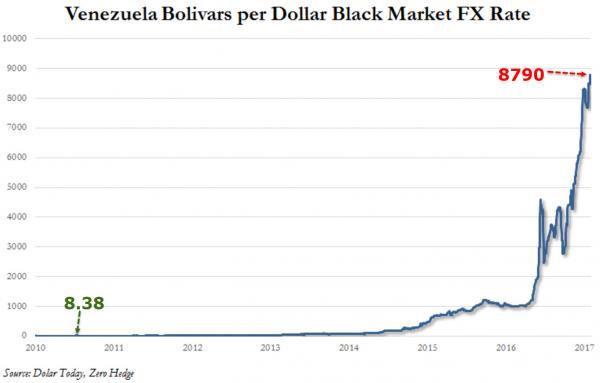 Think about that for a moment. In very real terms, the local currency has lost over 99.9% of its purchasing power since the year 2010. And that is in the nation with the world's largest oil reserves. Venezuela is in greater disarray than Libya among oil producers, requiring more than $200 per barrel for stability according to the IMF and the World Bank. 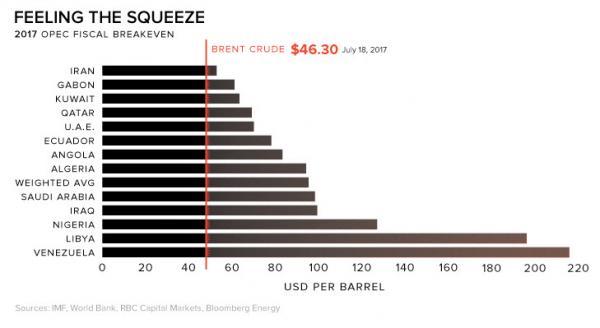 [By the way, the chart above (found at ZeroHedge) shows that ALL OPEC nations are operating at a fiscal deficit given today's low oil prices. Sadly (in our view) Iran appears best positioned because (we believe) the Obama Administration removed sanctions and handed them access to $150 billion that had been frozen. But I guess when you get $150 billion you can survive a little better  than most even despite low oil prices. You should also note that Saudi Arabia needs about $100/barrel to see fiscal break-even given their lavish wealth transfers and high spending. This is why the Saudis are planning to sell 5% of their state-owned ARAMCO (oil company) and raise (they hope) up to $100 billion. We have a good deal to say about the ARAMCO IPO and will be doing so in future Blogs.]

Basically, what this means is that Venezuela cannot survive in current economic form and things will only get worse. Venezuela's foreign currency reserves are at critically low levels, with less than $10 billion on hand in total, the lowest amount in 15 years. More than half of that is due in bond payments over the next six months. Venezuelan government bonds have been downgraded to the worst of the worst junk, now rated at CCC- with a negative outlook. The expected inflation rate is now estimated at 950% for this year compared to 500% last year.

The political battles are even worse with all signs of a civil war brewing. President Maduro is threatening to consolidate all power while the political opposition is attempting to form a separate government. For our part, President Trump has threatened serious sanctions (that might include cutting off all trade) in the event of a Maduro creates a puppy legislature as he has been planning. Governor Rick Scott of Florida is already committing his state to a similar course.

As we will be covering, this is not just an isolated situation. It has all the hallmarks of a major global crisis, including refugees and dangerous players in our own hemisphere. There are reports of Cuban military occupation. There is state-sponsorship of dangerous drug cartels and terrorists. There is involvement by Russia (including the sale of 5,000 surface-to-air missiles) and China (with debts so massive that China may hold control). There is North Korean and Iranian involvement as well.

Our good friend Dr. David Grantham shared an important piece from The Washington Times in May that bears repeating:

The deadly peril in Venezuela: The death spiral of a socialist government means trouble for the United States

If Venezuela burns, the United States will feel the heat. Like a nearby brush fire, the Venezuelan civil war threatens to erupt in a conflagration that will disrupt life throughout the hemisphere. Americans are accustomed to watching tinderboxes from half a world away, but this one is too close for comfort. Venezuela has become emblematic of the fundamental failures of socialism. When power is centralized and dedicated to economic redistribution, everyone shares equally in misery and want. With Hugo Chavez's Bolivarian revolution in 1999, Venezuela began a devolution at breathtaking pace, transforming itself from a modern, oil-rich nation to a miserable basket case. His successor, Nicolas Maduro, has destroyed free markets, resulting in food shortages (and toilet paper), inflation and rampant crime as the people struggle to survive meager government handouts.

The nation has been brought to a standstill but for the starving millions, facing government troops, demanding the ouster of the president. Nearly 40 demonstrators have been slain in the streets. About 1,300 others have been arrested and 250 of them have been put before military tribunals for trial. Venezuela is nothing less now than a police state. CIA Director Mike Pompeo raised a red flag over the Venezuela crisis last week before the U.S. Senate Intelligence Committee. He warned of the possibility that should that nation fall, its large stock of armaments could fall into the hands of terrorists. "It is a real threat, as we have all seen the situation in Venezuela continue to deteriorate [and] Maduro gets more desperate by the hour."

David Grantham, a national security analyst, writes in Townhall that Venezuela could easily become a Syria. "Maduro would rather dismantle government and assassinate opponents than keep the country viable," he says. "History tells us that such despotism and subsequent international inaction can lead to Assad-like levels of oppression." Like Syrians, Venezuelans are bedeviled by the virulent presence of Hezbollah, the radical Islamic terrorist organization. Vice President Tareck El Aissami's father, in fact, immigrated from Syria. If Hezbollah and its benefactors Iran and Russia prop up the failing Maduro regime, as they have with Syria's Bashar Assad, the Western Hemisphere could face the same sort of metastasizing terrorist presence that has ravaged the Middle East.

Though South America is a long way from the sites of these extremists, Venezuela is awash in a familiar geopolitical resource, oil. Access for infiltration of the U.S. southern border is the likely goal of Hezbollah. The U.S. Southern Command estimates that 30,000 illegals from Middle Eastern nations crossed the border in 2015 alone. Where there is human trafficking, there is money to be made. A task force of the Arizona Attorney General reported in 2015 a spike in money transfers from the Middle East and persons with Middle Eastern names to destinations in Mexican border towns….

The point is this. Venezuela is desperate and connected to all the wrong regimes and groups. The current government is hostile to the United States. And, they have military resources, criminal trade, terror groups, and an access point to our hemisphere just a three-hour flight away from Miami. Clearly, American national interests are at stake, calling for serious action. There are some specifics we will need to address in regard to direct implications for America and what we must do about them. For now, just know that Venezuela is a textbook case for economic failure with all sorts of national security implications.Venezuela is a mess and it is going to get worse before it can hope to get better.