War and Peace in the Information Age 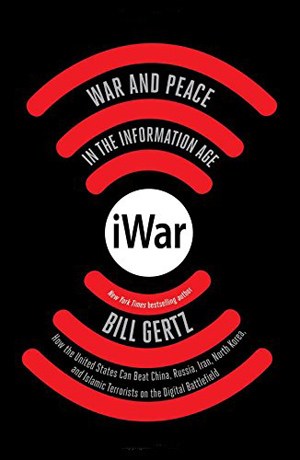 Bill Gertz is perhaps the best and most relevant reporter covering national security issues. I count Bill as a friend. In fact, it was his work on my DoD report that brought national attention and breakthrough five years ago. Through the years, he has covered many topics regarding economic warfare and does so as much an expert as reporter. Therefore, any article he writes is worth reading and any book he writes is a must have.

Bill's new book is iWar: War and Peace in the Information Age. In it, he exposes just how vulnerable America has become and how enemies and potential adversaries including Russia, China, North Korea, Iran, and Islamists have prepared to exploit our weaknesses. The threat is national and potentially systemic. But it is also personal and your family can be deeply impacted. Current policies have made us more vulnerable. We need to address the threats and iWar gives us a starting point to do so.

To amplify the accolades, tune into two terrific interviews with Bill. The first is from Rush Limbaugh and the audio can be heard HERE

The second is from someone I know personally and respect greatly, Ginni Thomas. She does a terrific video interview with Bill Gertz and it can be seen HERE.

What I like about Ginni's reports is how she goes in-depth. This is a perfect example. Bill explains how the current Administration worldview ignores serious threats, because to acknowledge them would require going against the politically correct narrative. Bill calls political correctness "domestic information warfare." One example? He exposes how the false narrative of "separation of church and state" has prevented us from dealing with the very real threat of radical supremacist Islamic ideology. Sadly, he explains that recent policies have been "to befriend our enemies and alienate our friends."

You can know that Bill Gertz will be invited as a regular guest on Economic War Room with Kevin Freeman when it launches.

We cannot afford to ignore reality any longer. America is not invincible or permanent. We face a hostile world and must take proper precautions to defend ourselves. This includes military readiness but also a recognition of the current cyber-economic war already underway. For eight years, foreign intelligence agencies have run amok in the United States using cyber espionage. Misguided White House policies and the political narrative (that all globalization is good) have kept us at risk.