WAY WORSE THAN WATERGATE: The Truth is Out But the Media Wants to Cover It Up 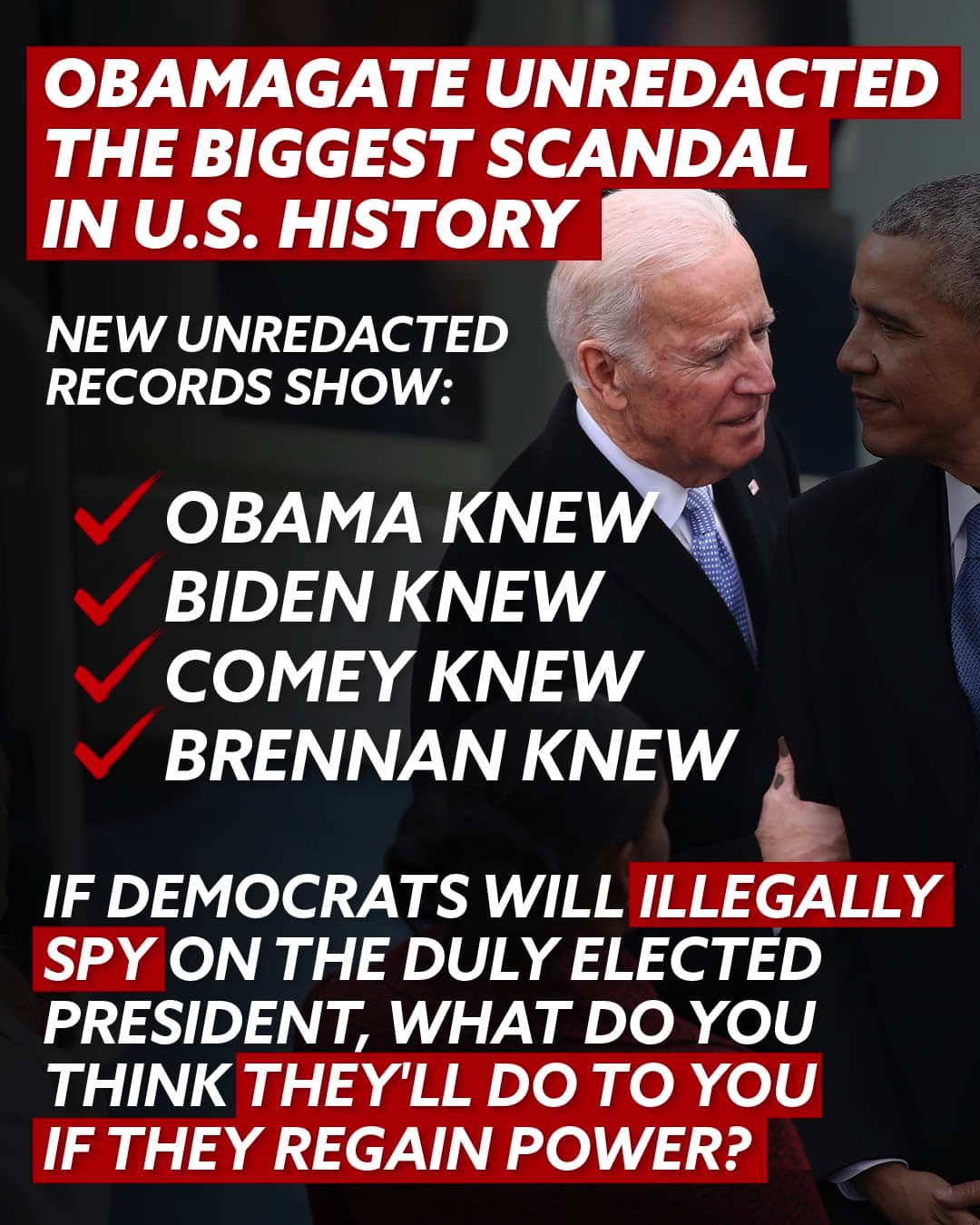 The Obama-Biden administration weaponized the Intelligence Community (IC) against a legitimate Presidential candidate and later set in motion a plan to take down a duly-elected President. Those are now indisputable facts, documented by the very ones who perpetrated the crime and now released for the public to see if anyone will notice.

What happened? We have handwritten notes from former CIA Director John Brennan that conclusively show that Obama/Biden were briefed on the fact that candidate Clinton was going to tie Trump to Russia to derail his campaign and distract from the Clinton email scandal. So what did Obama/Biden do? They doubled down, illegally throwing the full weight of government in for Clinton.

"A Means Of Distracting The Public":
Brennan Briefed Obama On Clinton "Plan" To Tie Trump To Russia

October 7, 2020 (excerpted)…"Brennan's handwritten notes would seem extremely serious on their face. It certainly indicates that Brennan considered the issue sufficiently serious to brief the President of the United States on July 28th. The notes state:

‘We're getting additional insight into Russian activities from [REDACTED]. . . CITE [summarizing] alleged approved by Hillary Clinton a proposal from one of her foreign policy advisers to vilify Donald Trump by stirring up a scandal claiming interference by the Russian security service.'

There is also a notation reading "Any evidence of collaboration between Trump campaign + Russia" and margin references to "JC," "Denis," and "Susan."  If Brennan thought this was serious enough to brief the President, shouldn't the media consider this sufficiently serious to investigate and report?" 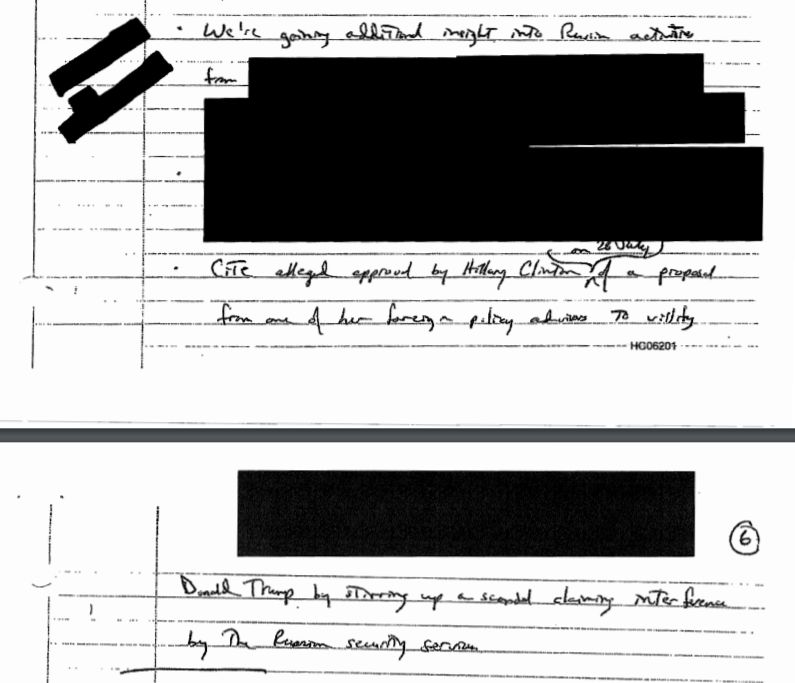 Unfortunately, this has been denied, obfuscated, and covered up by a complicit media. Our nation is at stake. This is WAY WORSE THAN WATERGATE.

Over the next few days, there should be a flood of declassified documents that provide further in-depth detail on the crime of the century. Will you be allowed to see them? This blog and our social media have been throttled in an attempt to keep you ignorant. If these truths had implicated Trump, you would see nothing else from now until election day. Instead, we get political theater on whether or not someone wore a mask while attending an outside sporting event.

By the way, did you hear the State Department announce that they have found the 30,000 deleted emails from Hillary Clinton's home server? They were able to retrieve them despite the felonious activity taken to "bleachbit" the server and destroy copies. The coverup and evidence destruction was initially deemed illegal by the FBI top lawyer and clearly was illegal for anyone who cared to follow the law. Instead of rooting out the truth at the time, the Obama/Biden IC was plotting against candidate Donald Trump.

Remember, we warned about the "Politicization of Intelligence" that I saw firsthand for a dozen years. It has now gotten so bad that our nation's future is at stake. When you have the FBI and CIA "in the tank" for one political party, there can be little hope for America. It gets worse when foreign powers seemingly control that party. [As an aside, the entire world knows that the Chinese Communist Party (CCP) is responsible for the pandemic. Even if the release was accidental, the CCP weaponized the virus spread through disinformation, corruption of the WHO, and by sending superspreaders around the world.]

As a summary, we now have rock-solid evidence that:

Sadly, the American media has not shared these obvious truths but instead has spun an unbelievable narrative to make President Trump look like the bad guy here. Yet despite all of this, the Trump Administration has an impressive list of first-term accomplishments as noted by one-time "never Trumper" David Sound in The Federalist (October 9, 2020):

I Didn't Vote For Trump In 2016, But I'd Crawl Over Broken Glass To Vote For Him Now

I don't care about the tone of his tweets nor if his opponents think he's rude. I've seen that he is a patriot who genuinely loves the United States of America and its people. Trump's list of first-term accomplishments has been truly impressive:

Perhaps that is why a recent Gallup poll found that 56% of Americans believe they are better off than four years ago. And that is despite experiencing the Chinese pandemic, the Marxist-insurgent riots, wildfires, the obvious partisan media attacks, and everything else thrown at us daily! That is the highest number EVER RECORDED at this point in an election year. Under any normal circumstances this would equate to a landslide Trump victory. Yet, major polls show Biden leading by 16 points? Something doesn't add up!

I would contend that the "better or worse off than 4 years ago" question will get a more honest response than "who do you support for President?" Some people are afraid of acknowledging their support for Trump. Beyond that, many pollsters are doing everything possible to make Biden look stronger. This includes oversampling Democrats, and when they do include Republicans, selecting those most likely to oppose Trump.

If a fair election were held today, I have little doubt that Trump would win a second term. But we have the media pounding away at him and the very real risks of outright election and voter fraud. And we must be aware that a second Trump term would spell doom for the Deep State so they will do anything (literally anything) to stop him.

What Do We Do About It?

In  our next post, I will share the nefarious plans the "deep state" has in the case that Biden wins. It is being telegraphed now for anyone with eyes to see.