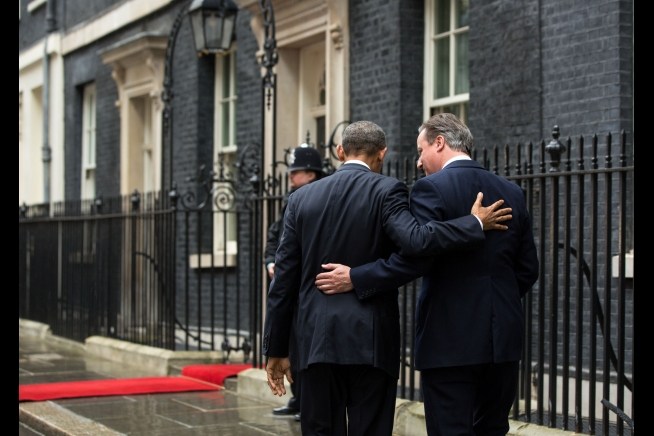 "I've Got Your Back?" President Obama meets PM Cameron in London

Last week was interesting to say the least. The announcement that China was possibly developing a gold-backed yuan wasn't that surprising as this has been mentioned by Russia and others for years. Reportedly, the new currency, if offered, would be a rejection of American dollars. This has been long threatened and in line with Putin/Russian rhetoric. But the threat from Saudi Arabia to dump $750 billion worth of Treasury holdings, while also possible bluster, appears directed at the petrodollar. The reason for the threat is that the Saudis did not like what was happening in Washington with the possible exposure of the long-hidden 28 pages of the 9/11 report by Congress. They also didn't like some proposed legislation that might open them to lawsuits.

The threat to dump bonds as an economic weapon has been used before, by the United States in the 1950s against Britain and France and more recently by China against Japan and China against the United States. Most experts dismissed the risk, believing that the Saudi kingdom would never follow through as such actions would hurt them. Of note, however, similar things were said about China and China has been selling Treasury bonds at a rapid pace. So far, there has seemed to be little damage. The problem is that the damage can be cumulative, unseen until a critical tipping point is met. Let's hope we aren't close to that tipping point.

Shortly after the White House dismissed any concern over the Saudi threat, President Obama made a stop in Riyadh. He wasn't greeted at the airport by the Saudi King as is customary, however. And the Middle Eastern newspapers largely downplayed his visit as that of a "lame duck." Relations have been described as "strained" by the British press. The Saudi threat comes on the heels of America's "pivot to Iran" with the de-escalation of sanctions. There is also the ongoing oil war started by the Saudis and aimed, at least in part, against the American shale industry.

After leaving the Saudi Kingdom, President Obama next traveled to London. There, also, he received somewhat less than the Royal treatment. Sure he had meals with the Queen and family. But there was no state dinner in London. The President had to travel to Windsor Castle. In this case, however, the economic warfare threat was not to the United States. Instead, it was the President who appeared to be threatening. During his visit, Obama made it clear that if the sovereign United Kingdom chose to leave the European Union (commonly referred to as "Brexit," a shortened form of British exit), as considered in a UK referendum this year, there would be serious trade repercussions. The vote will take place June 23rd.

Perhaps the rumors that the Queen supports Brexit have truth and she is upset with an American meddling in British affairs. There can be little doubt that the British people are upset. The leftist London mayor was clearly angry, calling the President "perverse and hypocritical." There are fears that the EU is going for much more than an economic union, possibly wiping out defense and military sovereignty.

What we are witnessing is alliances formed over many decades eroding before our very eyes. American economic hegemony is being challenged not just by possible enemies like Russia and China but also by supposed allies like Saudi Arabia and Great Britain. From their view, we are at fault for acting arrogantly with little regard for their situation. The Saudi's feel abandoned by our remarkable overtures to Iran. Of course, as the hidden 28 pages of the 9/11 report likely show, the Saudis have been less than perfect allies. We know they have been supporting radical Islamists in mosques on our soil and around the world.

In regard to the Brits, things haven't been that smooth with the Obama administration. Dinesh D'Souza believes that this may be due to an anti-colonialism inherited from Barak Obama, Sr. Whatever the reason, however, it is clear that the Brits have had differences with us on a number of issues. Leading British bank, Standard Chartered, had a problem with our approach to Iran, violating the sanctions we imposed and then upset with our catching them. More recently, the British snubbed our efforts to derail the Asia Development Bank and we lost global clout in the process.

Now, we are warning the British that if they leave the UK, it could be ten years or more before they get a trade deal with us. Wow. That's pretty heavy-handed treatment of the nation once considered our closest ally. Wonder if the Chinese are ready to step in to be their new best friend?

With the Saudis and the British, either side might say "With friends like this, who needs enemies?"

We believe that this fraying of the once mighty global order is not by happenstance. In fact, it is a logical outcome to many of the competing interests at play. The Obama team has seemed to favor Iran in many ways, hoping to level out power in the Middle East between Shia and Sunni. The Obama team did appear to snub the Brits and also the Israelis. At the same time, the Russians have been fostering a rejection of American hegemony. The way this is playing out is in global economic warfare. The implications are huge.

If Brexit happens, it will impact global trade and currency markets. If the Saudis reject U.S. Treasury bonds and end the petrodollar relationship, there will be major repercussions. If the Chinese setup a gold-back yuan (with Russian support) and court Saudi Arabia and Britain to their orbit, we lose global stature.

Our bottom line is that a strong and vibrant American economy and military is the antidote to all of this. China cannot match America when we are growing. The Brits want to be allied with us, especially when we support traditional American principles of sovereignty and representative government. The Saudis need to understand that America has an interest in defending our domestic energy production AND that we stand resolute against a nuclear Iran. Israel needs to know we have their back. The coming election is incredibly important to show where we stand on all of this.