When You Abandon Objective Truth 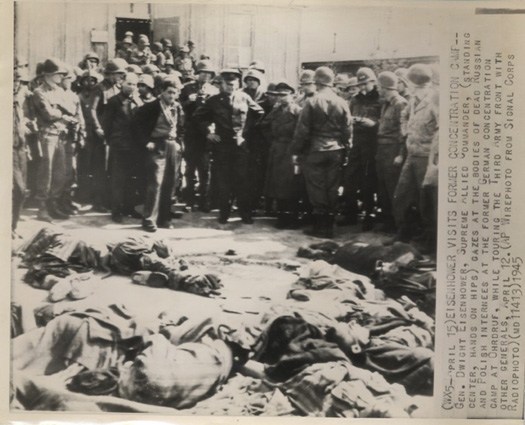 Maybe the greatest threat to our economy and way of life is the fact that so many people have agreed to abandon objective truth and embrace feelings and what they want to be real. The consequences of such are severe even if not initially realized. Like the fable of the Emperor's New Clothes, a society can delude itself for a while. But then all of a sudden, objective truth bursts through and everyone realize just how naked the Emperor really was. Only in reality, reality is often vengeful.

One of the great ironies of political correctness is that extreme tolerance lacking objectivity leads to intolerance. Extreme anti-hate leads to hate.

Case in point, a year ago incident in Palm Beach, Florida showed that a High School Principal was so caught up in PC culture that he basically denied the Holocaust. He was attempting to be tolerant. But in so doing, he was denying objective truth and whitewashing the worst kind of intolerance.

"Not everyone believes the Holocaust happened," he wrote, according to email records obtained by The Palm Beach Post through a public records request. "And you have your thoughts, but we are a public school and not all of our parents have the same beliefs."

He went on to say that as an educator he had "the role to be politically neutral but support all groups in the school."

"I can't say the Holocaust is a factual, historical event because I am not in a position to do so as a school district employee," Latson wrote.

That response led the mother to launch a yearlong effort to address what she called a school leader's failure to separate truth from myth regarding the genocide of an estimated 6 million Jews under Germany's Nazi regime in the 1940s.

Obviously, the attempt to be hyper sensitive produced the worst form of insensitivity. Holocaust denial is actually a crime in many places because it is so essential we never forget. General Eisenhower ordered that many photographs and much film be taken of the concentration camps, and the ovens, and the torture, and the horror specifically because he did not want the truth denied or forgotten. He personally appeared in many photos just to prove their validity.

General Eisenhower was right. It is essential that we remember. Sadly, recently Congresswoman Alexandria Ocasio Cortez flippantly called our border detention facilities "concentration camps." That lacked objectivity and it has consequences. No wonder Holocaust survivors were deeply offended. Why did she do it? Clearly, she was not being objective. Rather, she was using false imagery to score political points.

Clifford Humphrey penned an important essay in The Epoch Times that explains just how dangerous it can be to ignore objective truth in favor of feelings. Every thinking person should read this essay in its entirety.

Here are some excerpts:

What is two plus two? Well, as it turns out, it depends.

"Freedom is the freedom to say that two plus two make four. If that is granted, all else follows." This statement was the "thoughtcrime" of Winston Smith, the protagonist in George Orwell's novel "Nineteen Eighty-Four." Though not yet a thoughtcrime in the real world, this statement is increasingly suspect.

Politics is the conversation a whole people has about what is good and bad, and just and unjust regarding their common life and common nature as human beings . . .

Language itself, though, is only possible if reason is possible. The law of noncontradiction holds that two plus two can't be four and not-four at the same time. The whole potential for politics depends on that law, because by it people can use their reason to arrive at and assent to a conclusion, and by it, people can deliberate together and consent to government.

If one denies the law of noncontradiction, however, all that remains is the tyrannical rule of force, one party foisting its will on the rest. A tyrant, after all, doesn't bother asking for the opinion of his slaves.

Increasingly, progressives are using perplexing language that subtly denies the law of noncontradiction and hence reason, language, and politics. These progressives imagine that they are merely resorting to unconventional terms in order to avoid acquiescing to modes of thinking they believe support unjust power structures.

What they are really doing, however, is collapsing the only possible means of condemning injustice that isn't itself a form of injustice. Tyranny can't be made legitimate by making the tyrant and slave switch positions . . .

You can claim that two plus two equals whatever your truth or lived experience says it is, but if that is granted, only tyranny follows.

Doesn't this provide a basic explanation of what we are seeing with Antifa? Objective truth says that you can't act as a fascist and truly be anti-fascist. Those who use fascist tactics to fight fascism are, in reality, fascists. But the media and the progressive politicians seem afraid to acknowledge this. Take a look at this montage from the media.

Scared to Tell the Truth, Rewarded for Denying It

There's good reason for the fear. Some PC concepts are so ingrained that people are unwilling to even broach them. For example, when Martina Navratilova, once considered a feminist and gay-rights icon, spoke out about the unfairness of biological males competing as trans-women in women's sports, she was attacked. Yet, she made an objective point. The physical biology of men is different from that of women and even surgery and hormonal treatments will not change that basic fact. Despite this, every Democrat candidate for president has gone on record in favor of forcing  women's sports to accept trans-women athletes. So, if you speak the objective truth as Martina did, you can be condemned.

On the other hand, those who deny the objective and make feelings-based observations are often applauded. Witness the boldness of former Cabinet Secretary of Housing and Urban Development (HUD) Julian Castro on the campaign trail for President. He proudly stated that biological males who are trans-females have the right to have an abortion. He said it is only "reproductive justice." Never mind the fact that they can't get pregnant. He wants them to have access to taxpayer-funded abortions:

"I don't believe only in reproductive freedom. I believe in reproductive justice," Castro declared. "Just because a woman, or let's also not forget someone in the trans community, a trans female, is poor doesn't mean they shouldn't have the right to exercise this right to choose."

You know what makes all of this so sad is that there are real world consequences. Not long ago, a trans-male went to the hospital and the doctors were extremely perplexed. Only when they realized that "he" was actually a biological female and very pregnant were they able to properly diagnose and treat the patient. Unfortunately, the baby was stillborn. The consequences can be severe.

When the man arrived at the hospital with severe abdominal pains, a nurse didn't consider it an emergency, noting that he was obese and had stopped taking blood pressure medicines. In reality, he was pregnant — a transgender man in labor that was about to end in a stillbirth.

The tragic case, described in Wednesday's New England Journal of Medicine, points to larger issues about assigning labels or making assumptions in a society increasingly confronting gender variations in sports, entertainment and government. In medicine, there's a similar danger of missing diseases such as sickle cell and cystic fibrosis that largely affect specific racial groups, the authors write.

"The point is not what's happened to this particular individual but this is an example of what happens to transgender people interacting with the health care system," said the lead author, Dr. Daphna Stroumsa of the University of Michigan, Ann Arbor.

"He was rightly classified as a man" in the medical records and appears masculine, Stroumsa said. "But that classification threw us off from considering his actual medical needs."

This is just one example. A myriad of other complications that can arise. We know that different medicines affect biological males and biological females differently. And, it's not because the chemical compounds in them are "transphobic." Chemicals don't care what gender you feel you are.

The bottom line is this. When we deny objective truth in favor of feelings, we enter an Orwellian world that will lead to tyranny and great harm. Can you imagine if we allowed people to believe that 2+2 might equal 5? Would you want to drive over a bridge built following that delusion? Or get on an airplane built by a feelings-based engineer?

Or, we could lack objectivity in regard to the possible threats of radiation if we do 5G the wrong way. Take a look at this clip from The Economic War Room with Dr. Gil Amelio, former Chairman and CEO at Apple, inventor of the sensors that made digital cameras possible, and lead director for AT&T for nearly two decades.

It's important to note that this is not the same concern as raised by Russian propaganda to hinder American technological progress. It is objective information about cell towers and the radiation they emit from a PhD in physics who was a true pioneer in the mobile phone industry. We know the Russians used propaganda to attack our domestic energy industry. Now, they are using it to try and stop us from reasonable 5G development. But just because we can objectively say the Russians are wrong about 5G does not mean we can ignore the truth about the  potential dangers of 5G base stations. Truth is truth (even if it seems inconvenient). And our policy must be based on truth to be effective.

Remember the dire warnings of Vice President Al Gore that have hardly come to pass? Just because you sound scientific does not mean that you are actually objective. If we adopted the Green New Deal without an objective, factual basis, we would be committing economic suicide. The Paris climate accords may have "felt" good, but they really were never going to make a difference. One reason is that developing nations were largely exempt. So, had we stayed in the accords, the net result would have been an economic shift favoring developing nations at the expense of developed ones.

I call all this out because objective truth is essential for a successful society. It's ok to have feelings. But there are certain decisions that cannot be made based upon feelings alone. The world is what it is, not what we wish it to be.

This is a critical issue in regard to Economic Warfare. For example, the Chinese company Huawei as gone out of its way to deny any real involvement of the Chinese government or military. They talk a good story and lobby effectively. It even "feels" like the nice thing to do would be to believe them. If you look for the truth, however, you can find it. For example, every Chinese company by law has to spy for China if asked. Even U.S. based companies that operate in China have been required to conform, so why would we expect Huawei to be exempt? And there is plenty of documentation that demonstrates strong ties between Huawei and the Chinese military and spy agencies. Our challenge is to accept the objective truth.

Our challenge is to push back on the extreme political correctness that is spreading like a cancer through society. We must not deny the Holocaust or water-down its horror from our memory. We should not let feelings override objective truth. If we do, we will be at the mercy of our adversaries. The challenges we face globally don't care about our "feelings."