Who Might Be Willing to Cause a Market Crash? 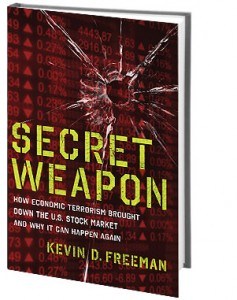 The stock market does not look strong at the moment despite record corporate earnings and a robust economy. Most blame the fact that the Federal Reserve is raising interest rates or the possibility of an outright trade war. These are reasonable explanations. But there is always a more sinister possibility that must be considered. In 1999, the Chinese authors of Unrestricted Warfare stated that "a single, manmade stock market crash" is a new concept weapon. In that book, they declared that "‘Financial warfare (in which a country is subjected without a drop of blood being spilled)' means entering and subverting banking and stock markets and manipulating the value of a targeted currency." They likened George Soros, and his infamous ability to crash markets, to a financial terrorist.

In light of this, a recent interview by a senior Chinese government economist becomes a bit chilling. From Asia Times:

As the trade row between the United States and China heats up, a previously dovish senior Chinese government economist has taken the gloves off, quoting Mao Zedong in an interview with SpiegelOnline: "You lead your war, and I lead mine."

Mei Xinyu, a member of the Commerce Ministry's Chinese Academy of World Trade and Economic Cooperation, warned that the two economic giants might be on the brink of a "financial war" with a potential outcome that is "beyond our imagination."

…He warned that China could sell its US government bonds (it owns more than $1 trillion worth) and dollar reserves, even if doing so is economically painful.

He said, "The US and China are the largest economies and largest financial markets in the world. But in the US, the financial sector plays a much bigger role than in China. In that sense, the US is vulnerable here, so of course, that's an option." [To READ at Asia Times…]

This matches what the Chinese Ambassador to the United States essentially threatened in the case of a trade war. It also echoes a Russian threat a few years ago.

Could the Chinese or Russians do it?

General Keith Alexander, then head of the NSA, said "yes," a foreign nation could crash our markets and economy. And, the Russians apparently were in preparation to do just that.

The sad answer is that anyone who virulently opposes President Trump might be willing to stomach an economic crash if it would drive him from office. From the Washington Examiner:

Bill Maher is ‘hoping for' an economic collapse so he can ‘get rid of Trump': ‘Sorry if that hurts people'

HBO host Bill Maher said Friday that he is "hoping for" an economic collapse because that is the only way the president's opponents can "get rid of Trump."

"It is going well," Singleton answered. "For now."

"Thank you, that's my question," Maher added. "I feel like the bottom has to fall out at some point, and by the way, I'm hoping for it."

"I think one way you get rid of Trump is a crashing economy. So please, bring on the recession. Sorry if that hurts people, but it's either root for a recession or you lose your democracy." [To CONTINUE READING at Washington Examiner…]

Couple that thought with recent George Soros warnings of another financial crisis looming (that he says can be blamed on Trump) and you see reason for concern. Mr. Soros has made it clear that he opposes President Trump on every level and will do everything in his power to keep Trump from "destroying the world." It is therefore very likely that Soros agrees completely with Bill Maher that a crash would be better than having President Trump succeed. The critical difference is that Soros knows what could cause such a crash.

One sobering thought is that the summer before a critical mid-term election might be the ideal timing for those who would want to take down the President. A stock market crash would dramatically shift the election. A "Blue Wave," where both the House and Senate fell to the Democrats, would create pressure for impeachment, stifle the Trump agenda, and set the stage to capture the White House in 2020. This possibility is hopefully remote but cannot be ruled out entirely. The market looks potentially weak with financial stocks currently in their longest losing streak in modern history. On the other hand, a market crash this year, if not accompanied by a Democrat takeover, would likely leave plenty of time to recover before the 2020 election.

Of course, the markets may not experience any further troubles this summer. The economy is strong, earnings are good, and trade tensions may diminish. But it is important to be aware that both China and Russia claim the ability to cause a crash at will. And, at least some of President Trump's opponents are secretly hoping they do it.