Why is the Virus Smiling?

China Daily is an official English-language newspaper owned by the Publicity Department of the Chinese Communist Party (CCP). Last week, the daily cartoon showed a coronavirus dressed as a cowboy with a smoking gun stretched out in an easy chair. The virus is smiling. On the wall is a trophy head of a bull. Underneath is the caption, "Stock Markets." The title of the cartoon? "Virus Kills Markets." 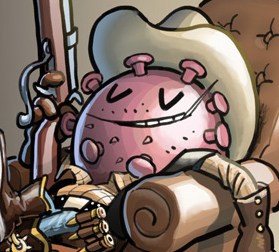 You can see the full cartoon for yourself at China Daily here: https://www.chinadaily.com.cn/a/202003/20/WS5. This virus has reeked genuine havoc on real people, costing lives, attacking health, and wiping out portfolios. So why depict the smug smile? It's rather hard to take such an attitude from the nation from which the virus first emerged.

So here is the question. Why would China want to glorify the virus and celebrate the bull market's death?

The answer is that the CCP wants to hurt President Trump's chance for reelection. In addition, the CCP hopes to expand China's global influence in the crisis despite culpability for the pandemic.

We have demonstrated that a market collapse in an election year is directly correlated with changing the party in power in the White House. Here are a couple of our earlier posts on this:

George Soros agreed and was quoted in January as warning President Trump that a market/economic collapse might doom his chances of reelection. Basically, he said the all-time highs in January had arrived too soon and that a disaster was on the horizon.

Liberal billionaire George Soros said Thursday that the U.S. economy could be headed for calamity as a result of President Donald Trump's efforts to juice American business and stock prices ahead of the 2020 election…."The stock market, already celebrating Trump's military success, is breaking out to reach new heights," he said. "But an overheated economy can't be kept boiling for too long. If all this had happened closer to the elections, it would have assured his reelection."

"His problem is that the elections are still 10 months away, and in a revolutionary situation, that is a lifetime," Soros said.

That was literally just two months ago! No one was really discussing the Coronavirus. But in the same interview, "Soros said Chinese President Xi Jinping is ‘trying to exploit Trump's weaknesses.'" We agree. And we believe that Xi is using the pandemic to hurt President Trump.

Here are a few facts that must be understood:

Finally, we need to realize that China is not only morally responsible but also may be legally responsible. And, they should pay reparations for the tremendous economic damage they have caused. This should be a bi-partisan effort.

Without question, this is Global Economic Warfare. We are talking trillions of dollars. We know where this started. And now we know for certain the Chinese Communist Party's intends to use the virus to destroy President Trump's reelection, the stock market, and our economy.

By the way, if you missed it, you should watch our special episode of the Economic War Room last week to address the Economic Impact of this pandemic (we even put it on YouTube so everyone can watch it free).