Will the Sun Set on the American Empire?

A very interesting opinion article was written by Harold James, Professor of History and International Affairs at Princeton University and Professor of History at the European University Institute, Florence. Gulf News of Qatar published the piece yesterday which is a "must read." Few other outlets provided coverage (which we find strange given the significance of the piece).

Here is a quick intro and a few excerpts:

This article raises many interesting points and a few questions. It should be obvious that the USA plays the role of superpower today, a position held by The British a century ago. Then, the British were concerned about the rise of Germany and the United States, especially economically. It's fairly simple to draw comparisons regarding our concerns with China and the Middle East. At the time, the British held the world's reserve currency.

One hundred years ago, the phrase "the sun never sets on the British Empire" was commonly understood\. From Wikipedia:

By 1922 the British Empire held sway over about 458 million people,one-fifth of the world's population at the time. The empire covered more than 33,700,000 sq km (13,012,000 sq mi), almost a quarter of the Earth's total land area. As a result, its political, legal, linguistic and cultural legacy is widespread. At the peak of its power, the phrase "the empire on which the sun never sets" was often used to describe the British Empire, because its expanse across the globe meant that the sun was always shining on at least one of its territories.

As pointed out by Harold James, the British began to use their financial power to maintain their global position. In hindsight, they had clear justification to be concerned about Germany as evidenced by two World Wars. And, interestingly, revelations a couple of years ago indicate that the Americans were also concerned regarding Britain at about that same time.

War on the ‘Red Empire': How America planned for an attack on BRITAIN in 1930 with bombing raids and chemical weapons

Details of an amazing American military plan for an attack to wipe out a major part of the British Army  are today revealed for the first time. In 1930, a mere nine years before the outbreak of World War Two, America drew up proposals specifically aimed at eliminating all British land forces in Canada and the North Atlantic, thus destroying Britain's trading ability and bringing the country to its knees.

. . . it is fascinating that there were enough people inside the American political and military establishment who thought that such a war was feasible. While outside of America, both Churchill and Hitler also thought it a possibility during the 30s – a time of deep economic and political uncertainty. 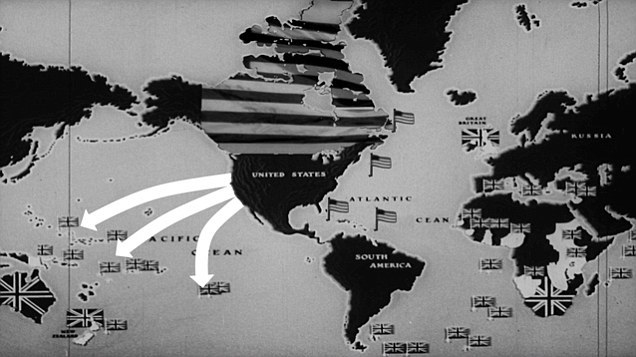 After the 1918 Armistice and throughout the 1920s, America's historic anti-British feelings handed down from the 19th century were running dangerously high due to our owing the U.S. £9billion for their intervention in The Great War. British feeling against America was known to be reciprocal. Across the Atlantic, Britain had the largest empire in the world, not to mention the most powerful navy.  Against this backdrop, some Americans saw their nation emerging as a potential world leader and knew only too well how Britain had dealt with such upstarts in the past – it went to war and quashed them.  Now, America saw itself as the underdog in a similar scenario . . .

Even Winston Churchill said while people regarded a war with the U.S. as inconceivable, it was not. ‘America felt Britain had thrown it under the bus in order to stay top dog,' says Professor Mike Vlahos, of the U.S. Naval War College. ‘The U.S. was forced to contemplate any measure to keep Britain at bay.' Even Hitler thought such a war was inevitable, but astonishingly wanted Britain to win, believing that to be the best outcome for Germany, since the UK could then join his forces to attack the U.S. . . .

TO CONTINUE READING at THE DAILY MAIL….

So, we know that there was mutual suspicion a century ago between the world's superpower and two emerging powers. Harold James makes the accurate point that this evolved first into an economic and financial war before the nations chose sides in two World Wars.

Fast forward a hundred years. Today, we believe that elements in China, Russia, Latin America, and the Middle East (sort of the BRICS nations plus some OPEC members), are feeling as we did at the start of the last century. They view the dollar's reserve currency status as both a threat to their future and sovereignty and a vulnerability that can be exploited.

In hindsight, the sun did set on the British Empire even though they were on the winning side in two World Wars and the Cold War. Sundown was more than obvious when George Soros used financial markets to break the bank of England in 1992.

Now, is America so arrogant to assume that the dollar will always reign supreme? Or, are we wise enough to recognize the global economic war emerging and respond appropriately? Only time will tell.