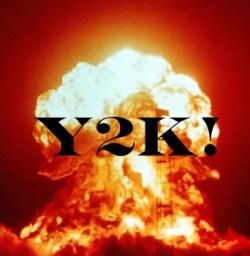 One of the big arguments faced when dealing with the issues we've covered in this Blog and our books, Game Plan and Secret Weapon, is that Y2K came and went without disaster. For many people this is somehow "proof" that disasters are all made up, that there are no real risks we face. There is thus a false sense of security that permeates much of society.

As you may recall, about 15 years ago, the world was excited by the transition to a new millennium in the calendar but concerned that our computer systems had a serious flaw that might destroy life as we know it on planet earth.

It is true–Y2K was not a massive disaster movie playing out in real life. Planes didn't fall from the sky. Pacemakers did not suddenly stop working. There were not massive riots and all that stored food may have rotted. The transition from December 31, 1999 to January 1, 2000 was virtually seamless. Apparently, computer clocks were able to show the year as "00" without assuming it was the year 1900. Or, perhaps, the hundreds of billions of dollars spent helped avoid the worst problems, upgraded technology, and produced a surge of capital investment. The good news is that for whatever reason, there was no disaster.

The bad news from the non-event of Y2K is that it led to significant complacency. Any discussions of reasonable preparation are now sneered at or even reviled. In fact, it has become an American pastime to mock "preppers" of any stripe regardless of motivation. It's "Murphy's Law" in reverse:  "Whatever can go wrong simply won't happen." Of course, this is ridiculous on its face. But, this appears to be the thinking of a large swath of society with limited exceptions.

While Y2K did not prove to be the disaster that so many feared, there have been some pretty bad events in the past few decades that could have been predicted and should have merited mitigation. Here are just a few examples:

Arrogance and ignorance combined can allow people to ignore rational warnings. It may be because one or more predicted disasters failed to materialize or simply because no one is willing to imagine what might happen. It takes a sense of history and a touch of humility to recognize that there are genuine threats that merit responsible action. There should be little surprise, therefore, that retired persons show the greatest understanding of the economic warfare threat. They grew up in the shadow of World War and witnessed the Cold War. They know that there are enemies of the United States and that the dollar isn't really almighty. They realize that America isn't invincible and that freedom comes at a price. They grasp that a massively indebted nation may not be able to afford the price of policing the planet. They remember that there are times when we must cry out to God for help, especially in the dark times. Sadly, such wisdom is absent from much of our leadership today. We should take heed from the wisdom of Proverbs 22:3-4 (KJV):

"A prudent man foreseeth the evil, and hideth himself: but the simple pass on, and are punished. By humility and the fear of the LORD are riches, and honour, and life."

We as a people have grown too complacent. We assume that everyone will always want American dollars, our economy will always be the world's largest, and that our military will always be vastly superior, even if we have to cut funding. The facts speak otherwise. There is an emerging global effort to unseat the dollar as reserve currency. Some estimate that China's economy may surpass ours this year. And our military is cutting its budget while others are ramping up spending.

One quick example of an area for concern (that we will cover in detail later) is our major dependence on foreign parts, energy, and materials for our economy. If the world was entirely peaceful and everyone was seeking to maximize economic benefit, it would make sense to outsource critical parts to the optimum supplier. In the reality of economic warfare, however, this creates significant vulnerability.

We already know that corporate espionage has been stealing billions if not trillions of dollars worth of American wealth and innovation. But what happens, for example, if our military depends on a certain component manufactured in a non-friendly nation and we end up going to war? We already know that our space program has been depending on the Russians. With the recent Ukrainian turmoil, the Russians have told us they will no longer provide such support. What would we do about all the "made in China" items we depend on in the event of conflict? Worse still, there are credible reports that "backdoors" may have been built into chips supplied by the Chinese that could threaten operation of critical equipment. It is not out of the realm of possibility to imagine that some of our military hardware could be effectively shutdown if semiconductors with a hidden "off-switch" were incorporated into the design.

The reality is that it's only prudent to consider these and other risks we face. It is foolish to ignore the lessons of history. We cannot rationally dismiss legitimate concerns simply because a Y2K disaster didn't happen.